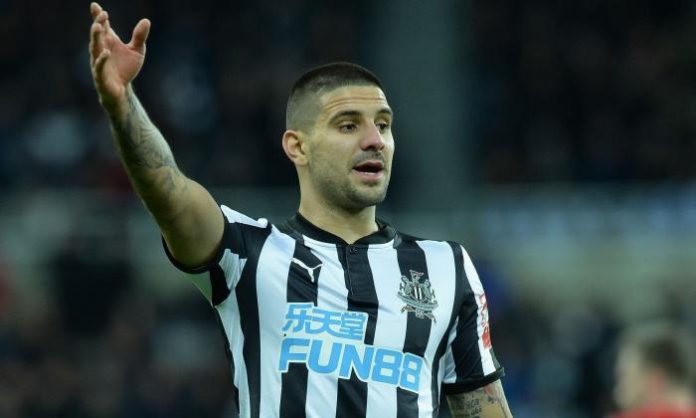 Newcastle United striker Aleksandar Mitrovic has not ruled out a return to the Magpies at the end of his loan spell with Fulham.

The 23-year-old dropped down the pecking order behind Dwight Gayle and summer signing Joselu and managed just 152 minutes of Premier League football in the first half of the season.

He joined Slavisa Jokanovic’s promotion-chasing side Fulham in January after the Magpies signed Islam Slimani on loan from Leicester City.

Mitrovic has already made a strong impact at Craven Cottage and has scored two goals in his last two games. The Serbian scored in the 1-1 draw against Bristol City and followed it up with another in the 2-0 victory over Championship leaders Wolverhampton Wanderers.

When asked to comment about whether he sees his long term future at St James’ Park, the former Anderlecht star said “we will see”, adding that his primary focus is now on winning promotion with Fulham.

“I don’t think about Rafa, about Newcastle, I am a Fulham player, I’m here and want to get Fulham promoted – this is our target,” said Mitrovic, as quoted by Get West London.

“My target is of course to score as many as I can, but first my target is to try help the team every day.

“Of course I wish Newcastle all the best, I hope they will stay in the league, they deserve it because they have a good team, good fans and a good manager.

“I hope they will stay in the league and in the summer we will see what happens but I’m happy here, focused here and looking forward to playing every game.”

Mitrovic has two and a half years remaining on his present Newcastle contract and if he scores regularly at Fulham, he might get another chance to impress Benitez in the summer.