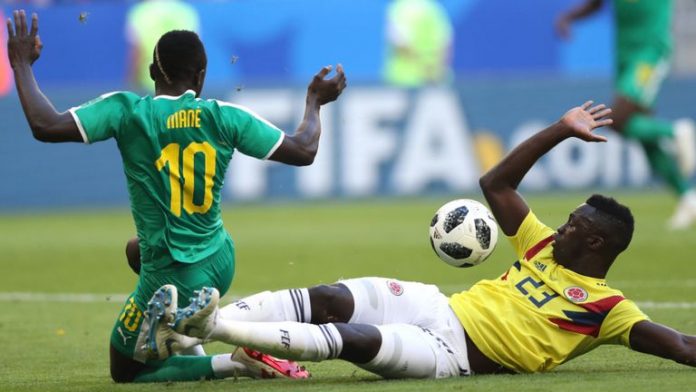 Senegal’s elimination from the World Cup due to fair play rules completed a miserable tournament for African nations.

Not since 1982 has an African team failed to reach the second round of the World Cup and this year’s failure was particularly abject.

In 15 group games the African teams managed just three wins and one of those came against minnows Panama.

Egypt, Morocco and Tunisia were all knocked out before the third group games started, while Nigeria’s defeat against Argentina was no surprise given their previous tournament record against the South Americans.

Senegal were unlucky to be eliminated after picking up more bookings than Japan, although their failure to score against a Colombian team that was without the injured James Rodriguez for an hour cost them dearly.

Liverpool duo Mohamed Salah and Sadio Mane had been heavily talked up ahead of the World Cup, but both failed to stamp their authority on the tournament.

Victor Moses was another player who didn’t deliver what was expected of him and the Chelsea star’s decision to switch nationalities from England back in 2011 looks increasingly questionable.

Read on as we look at how the five African nations fared at the World Cup.

Egypt looked to have a good chance of qualifying from Group A, but their hopes of progressing probably ended the moment Salah injured his shoulder in the Champions League final.

The seven-time African champions finished the group stage without a point and their over-reliance on the Liverpool star is an issue they will need to address moving forward.

Disappointingly beaten by Iran, Morocco redeemed themselves with improved performances against Portugal and Spain.

However, their lack of a cutting edge proved to be their undoing and complaints to FIFA about “serious referee errors” causing their exit from the tournament smack of desperation.

Tunisia claimed their first win at the World Cup for 40 years as a second-half fightback saw them beat Panama 2-1, but the result was too little, too late.

They pushed England hard in the opening game before being demolished by Belgium, and they still look a long way short of the quality needed to make an impact at the World Cup.

Beaten by Croatia in their first game, Nigeria gave themselves a chance of reaching the knockout stage by defeating Iceland.

Moses’ penalty in their last match against Argentina almost sent them through, but Marcos Rojo’s late goal ended their hopes.

Senegal came closest to reaching the last 16, although they were squeezed out of the competition on yellow cards accumulated having finished level with Japan on points, goal difference and goals scored.

They created plenty of chances in their final match against Colombia, but Mane was another Liverpool player who failed to live up to the hype as Senegal blew a golden opportunity to progress.

There has been plenty of talk in the past about an African nation winning the World Cup, but it seems to be as far away from happening as it’s ever been.

Africa will now be watching on as the likes of Brazil try to prove they are worthy 7/2 favourites at the head of the betting market.

They will face strong competition from Spain, France and Belgium, while players like England’s Harry Kane (7/4) and Portugal star Cristiano Ronaldo (9/2) will battle to win the Golden Boot awarded to the tournament’s top scorer.

One thing those nations and players appear to have in common is the support of their respective football authorities.

Cameroon legend Samuel Eto’o has previously cited that the lack of respect many African players receive from the people governing the game around the continent holds back the various teams.

Political influence, as well as the socio-economic environment in Africa, also adds to the problems and if its teams are to succeed globally, a clear pathway to local success needs to be created.

Academies are forever appearing across the continent, but many players would still rather compete in Europe than in their domestic leagues.

One ray of light on the horizon is that the number of African teams at the World Cup will increase from five to nine in 2026 as the tournament expands.

Time and investment is needed to allow the game to grow, but whether it will ever be enough to allow African teams to truly challenge the top nations at a World Cup remains to be seen.