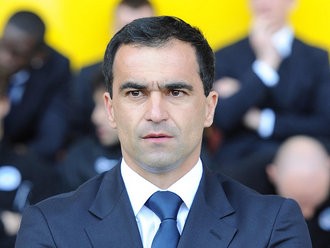 Somewhat ironic that Aston Villa’s Hollywood supporter Tom Hanks starred in a film called ‘The Da Vinci Code’ where he made more luck at cracking that than he did at predicting the club’s new manager. “Is Brian Clough still alive to take over” asked Mr Gump during a recent interview with The Sun to a cry of sniggers from the on looking journalists. As much as the Villa faithful would love a character resembling of Old Big Head in the Trinity Road dugout, it now appears a young matador is sauntering his way to Birmingham to tame the lions of Villa.

Roberto Martinez has been granted permission by Wigan Athletic chairman Dave Whelan to speak to the Midlands outfit regarding the vacant position. Many will be surprised that Randy Lerner has earmarked such a young inexperienced coach in Martinez, having flirted with the possibility of hiring household names such as Carlo Ancelotti and Rafael Benitez. However, what Martinez lacks in experience, he makes up in attributes.

Do not let a couple of relegation battles at the DW Stadium fool you. It is a minor miracle that the Spaniard has kept The Latics afloat from the Championship due to their financial constraints. Each year they have been written off, yet they still live to tell the tale in England’s top flight.

Roberto is renowned for his free flowing philosophy, allowing his players to express themselves on the pitch and play their football in an attractive manner. His man management skills are excellent and his rapport with his peers and players is genuine. His relationship in particular with Whelan is rather endearing. Martinez will always be grateful to the 74-year old for giving him his big break in English football back in 1995 where he joined as a part of the ‘three amigos’ along with Jesus Seba and Isidro Diaz.

His first role in management occurred in 2007 at a former club in Swansea City. Now the Welsh side will be playing their trade in England’s top flight next season and their rise to the promise land more or less began under Martinez who, in his native language, implemented a style of tiki-taka football to the Liberty Stadium. His philosophy remained intact as he took over from Steve Bruce at Wigan. Although they have been in a relegation dogfight for the near entirety of his tenure, he has succeeded in avoidance where as others have succumbed to that dreaded fate.

The trust he has from his chairman, who has stuck with him through thick and thin is a testament to the football club as a whole. Wigan get negative press for being a small club residing predominantly in a rugby town but they never get the plaudits they should for the way they conduct themselves both on and off the pitch.

Now Aston Villa waits with the ball well and truly in Martinez’s court – down to him to have his say on his destiny. Dave Whelan has praised Randy Lerner for the way Villa have conducted themselves by graciously requesting permission to speak to the Spaniard. Today in an interview with SKY Sports Mr Whelan said he “was resigned” to Martinez leaving but still beheld a feeling in his stomach that he will remain in the North-West. Martinez feels he owes a huge debt of gratitude to his chairman for his continuous support and this will play a part in his contemplation.

Nevertheless a move to Aston Villa would propel his status as a manger to new heights. A big club that is looking to get back into the top six of English football – accompanied with substantial funding. He will be overtaking a club with a number of departures such as Brad Friedel, Nigel Reo-Coker, John Carew and inevitably Ashley Young, but the wealth of talent that would remain– along with new fresh faces – breathes real optimism for both parties.

This could be a masterstroke by Randy Lerner to hire one of the league’s most promising managers whose youthful exuberance could be just the tonic needed for Villa to prosper.