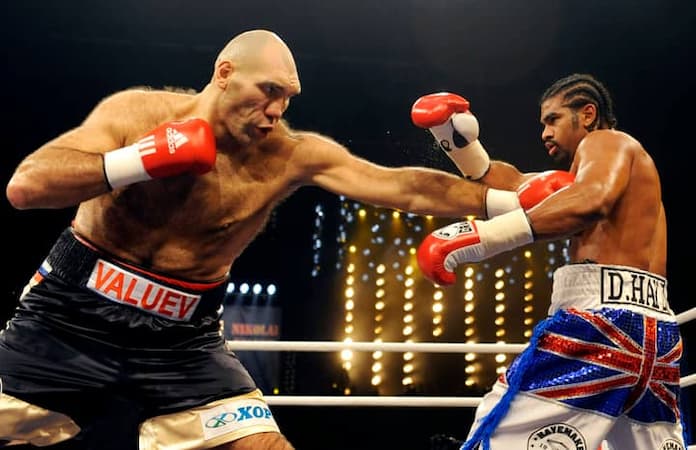 7-foot former world heavyweight champion of the world, Nikolai Valuev, is reportedly being called up by Vladimir Putin to fight for Russia. Putin has reportedly called up a number of big names, including the tallest and heaviest boxer in history.

Not a story you probably thought you were going to be reading today, but former world heavyweight champion Nikolai Valuev is set to join the Russian army and fight for his country.

Leader of Russia, Vladimir Putin, has reportedly tapped the shoulder of a few ‘big names’, with the 7-foot giant being one of them. Putin wants Valuev to fight for Russia in their conflict and war with Ukraine.

During his boxing career, Nikolai Valuev was an absolute animal. He was 7″0 tall and weighed around 150kg. At one time, Valuev was regarded as one of the scariest people on the planet.

That was of course until Valuev met Britain’s David Haye. In a fight that was billed ‘David vs Goliath’, the ‘Hayemaker’ picked Valuev apart and defeated him via majority decision. That was back in 2009, and ended up being Valuev’s last ever professional boxing fight.

He boasted an incredible record of 50-2 when he eventually hung the gloves up after his defeat to Haye for the WBA World Heavyweight Title. A belt Valuev had held for over two years at the time.

Despite having major mobility issues given his size, Valuev – who now works in politics in his home country – has still been poached by Putin to join the fight on the frontline against Ukraine.

When asked about being called up to the Russian army, the 49-year-old told Russian language publication Izvestia:

Valuev isn’t at home in Russia now, but said he will return home immediately. He went on to add, “Next week I will definitely go and report to the enlistment office.”

Putin is trying to recruit an extra 300,000 troops to fight for Russia in their war against Ukraine, so it comes as no surprise that Valuev has been called upon. Former Premier League star, Diniyar Bilyaletdinov, has also been tapped on the shoulder by Putin, who is trying to strengthen his army considerably.