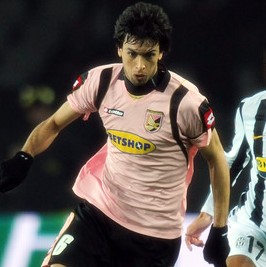 The Sicilian region of Italy currently possesses the next Zinedine Zidane.

That is the view of Palermo’s owner Maurizio Zamparini who is marveled by the potential and brilliance of Javier Pastore.

The young Argentinean gave a scintillating account of himself during the clubs epic 3-1 victory over Juventus in Turin midweek where he opened the scoring and continued to influence his team’s cause leading to a man of the match performance.

This has lead to a glowing appraisal from his employer. Zamparini is highly impressed with his player’s contribution thus far in Serie A – comparing him to the elegant French legend Zinedine Zidane.

“He is the new Zidane. He is very strong and complete.”

“He has been the main protagonist for us in every game this season. He is a talented player and I’m happy for him.”

His attributes and potential have not gone unnoticed by Europe’s heavy hitters, which include Jose Mourinho’s Real Madrid. Los Blancos inquired about his availability during the summer but were subsequently declined any advances.

Zamparini is eager to hold his prized asset for at least the next two seasons so he can have the pleasure of viewing his expertise – going on to say he will one day be worth as much as FIFA World Player of the Year Lionel Messi.

“I hope Pastore remains in Palermo because we want to enjoy his talent.”

“I want to keep him for at least another two years because he’ll be worth as much as Messi.”

The 21 year old was a part of Diego Maradona’s World Cup squad this past summer in South Africa where he made two substitute appearances against Greece and Mexico.