Kwadwo Asamoah started early in his home country of Ghana, playing for Kaaseman in his youth. He never made a senior appearance for that club, eventually transferring to Liberty when he turned 18. He played for Liberty for only 1 season. As a midlevel club in the Ghanaian Premier League, he only made a few appearances for the club, but it was enough to gain the attention of clubs in Europe. The Swiss club Bellinzona acquired him from Liberty, but immediately sent him out on loan. He initially was loaned out to Torino, but this was a poor fit. After that short loan spell, he was loaned to Udinese, where he would stay for the entire 2008-2009 season. During his season on loan at Udinese, he made 27 appearances and scored 2 goals. At the end of that season, he was acquired by Udinese on a permanent basis. After 5 clubs in 3 years, he found a stable home with Udinese in north-eastern Italy.

During his season on loan at Udinese, he went to the 2008 African Cup of Nations, held in his home country, but he didn’t make it on the field for the National team, who finished 3rd. In 2009, he made his first senior appearance for his country in the World Cup Qualifier against Benin. He came on in the 58th minute, and finished the game. During the successful qualification campaign for the 2010 World Cup, he made 3 appearances for the National team including his first international goal in a 1-0 win over Mali.

After his permanent transfer to Udinese, he started to settle in. In the 2009-2010 season, he made 27 appearances, scoring 1 goal. He started to claim the left midfield position in Udinese’s 4-3-3 as his own. It was really shown the following season, in 2010-2011, when he started every league game for the northeastern Italian club and doubled his goal total over the previous season.

In January of 2010, he left Udinese to go play for Ghana in the 2010 African Cup of Nations in Angola. He started and played all 5 matches for Ghana, as he split his time between the central midfield or out on the left side. He was a key performer for Ghana, as they lost to Egypt 1-0 in the final. It was the summer of 2010 when Kwadwo Asamoah announced himself on the African football scene in the 2010 World Cup, He started all 5 games that Ghana played in South Africa, and picked up 1 assist against the United States in the first knockout round. His performances in the African Cup of Nation and World Cup 2010 were enough for him to win the Most Promising African Player award for 2010.

In his last season at Udinese, he made 38 appearances and scored 3 goals, while he’s also made 41 caps for Ghana so far in his international career. His solid performance internationally, and in three years with Udinese, was enough to pique the interest in several big European clubs, including Manchester United and Juventus.

After a month of rumours, it appeared that Juventus had won the race to acquire the Ghanaian, especially after completing a medical for the club in early June. But, according to reports on June 23rd, the transfer has stalled as Udinese is holding out for £15 million. It still appears likely that Juventus will acquire the skills of the hard-working central midfielder, but it’s not a done deal yet. 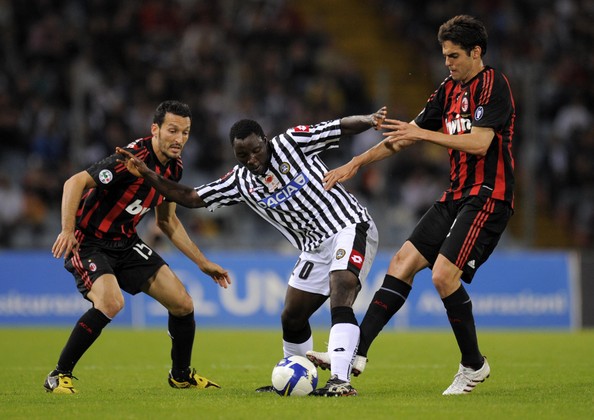 The 23-year old central midfielder has numerous strengths which he has shown in 3 years in Italy. Even though he is only 173cm tall, he plays much bigger. He’s strong on the ball, and hard to muscle out of the way. With his strength and his skills, he qualifies as one of a dying breed in football today, a box-to-box midfielder. He has a great work rate, and his concentration and dribbling skills are both well above average. He is comfortable running at defenders with the ball, and his short passing ability makes him effective at moving the ball laterally and forward to link the defense with the attack. In this past season with Udinese, he averaged 50 passes a game with an 82% completion rate. He averaged 0.9 key passes a game, and had an exceptional rate of 2.4 long balls a game. He was also averaged 2 successful dribbles a game.

He has great shooting skills inside the box, and he often times his late runs into the box for maximum effect. Some of his offensive skills may not be as sharp as you’d get from an attacking midfielder, but his ability to play both ways is what makes him a fantastic midfield prospect. He plays good defense, but he isn’t known for making standout defensive plays. He positions himself well to disrupt the oppositionís attempts to move the ball through the center of the pitch. He averaged 2.6 tackles and 1.2 interceptions in Serie A games last season. The majority of his defensive impact will come from his positioning, not from his tackling.

With his numerous strengths, there come some weaknesses. He makes good passes, but he’s not the player you’ll look at to make the killer pass to unlock a tough defense. His size makes him vulnerable to oversized central midfielders, and he’ll also struggle against a tight pressing defense. With the ball, he occasionally gets overconfident and tries to take on defenders with his dribbling when passing would be a better option.

Defensively, he’ll position himself well to disrupt the opposition but he’ll struggle to make a clean tackle when it’s needed. He’s slow to dive into tackles, and a midfielder with pace can cause him problems. He is often reliant on help from the other central midfielder to ensure he doesn’t get overwhelmed, and for this reason he can’t be used as the sole defensive midfielder.

A true box to box midfielder, Kwadwo Asamoah has the skills to play numerous locations in the midfield. For the last two years, he’s played as the center midfielder or the left midfielder in Udinese’s 3-5-2, while for the Ghanaian National team he plays as the number 10 in a 4-2-3-1. This shows the talents he has as for Udinese he is required to help maintain possession and move the ball forward to link the defense with the attack. In addition, he makes great contributions for the club defensively.

With the National team, he is used much more as a creative attacking midfielder. He works well up front, using his strength and his guile to create spaces to operate in close to the box. He struggles a bit in playing a true killer pass in to unlock a well-organized defense, but he rarely gives the ball away with a careless pass. He is more than serviceable as an attacking playmaker, who’s not afraid to get the ball in tight spaces and use his close-control skills to take on defenders inside the box.

With the increasing specialization of midfielders, Asamoah is an increasingly rare commodity. So many midfielders now are great on defense, but dreadful with the ball at their feet, or they are magicians with the ball, but they disappear from the field when their team loses possession. But you don’t need to worry about that with Kwadwo Asamoah. He’ll put as much effort in defensively as he will offensively. He is a very reliable, if not flashy, defender who positions himself well to disrupt the opposition. He has performed well for the Black Stars as the attacking playmaker, but the clubs that are interested in him seem to be looking for him to play deeper in the midfield.

While there seems to be a delay in his transfer to Juventus, it still seems like the likely destination. At only 23 years old, with already 41 international caps, he seems likely a good value at ‚Ç¨15 million or less. He’s already played 4 years for Udinese, and the last two years he has started almost every game for his club. He has shown the flexibility to play as a deep central midfielder, like he has for Udinese, or as an attacking midfielder, like he has for the Black Stars. His ability and skills going both ways means that he has a chance to become one of the best 5 African players in Europe if he keeps developing and playing as he has since his arrival in Europe. If Juventus, or another club, manages to pick up Kwadwo Asamoah over the summer, they will definitely be getting a quality midfielder and a player who hasn’t reached his ceiling yet.

RangeRooney is the brains behind RedRants’ Tactical Analysis feature called ‘The Tactics Board’ which features an in-depth breakdown of what went right (or wrong) after every competitive Manchester United fixture.