The Copa America is the world’s oldest international championship with the first tournament held in 1916 and the latest in 2011. Some of the greatest players to have played the beautiful game have fought for the coveted trophy.

Here are ten all-time greatest records from the Copa America:

Uruguay are the most successful nation in the history of the Copa America having won the tournament a record 15 times. Their win in the 2011 tournament was a shock to the football world and it meant they head a list of previous winners including Brazil and Argentina.

Argentina has hosted the tournament more times than any other nation with nine tournaments.

Uruguay are second in the list having hosted the event seven times and Chile and Peru both share third for this record with six tournaments hosted each. Brazil have only hosted the tournament on four occasions.

Two players share the record for the most goals scored at the Copa America; Norberto Mendez of Argentina and Zizinho of Brazil. Both players have scored 17 goals in total.

Teodoro Fernandez of Peru and Severino Varela of Uruguay are joint second in the list with 15 goals scored each.

Sergio Livingstone of Chile has appeared at the Copa America more times than any other player with 34 matches.

Zizinho is second with 33 appearances and Leonel Alvarez and Carlos Valderrama of Colombia share third place with 32 appearances at the tournament each.

Three coaches share the record with two wins each and no other coach has won the tournament on more than one occasion. 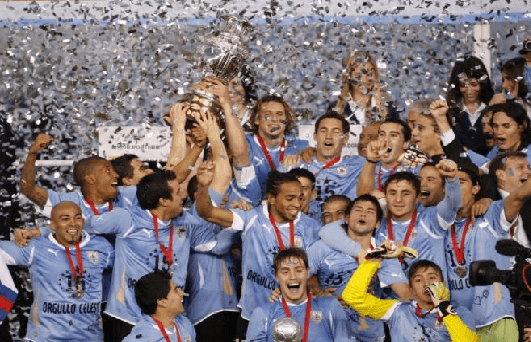 The longest match in the history of the tournament took place way back in 1919. It was the final between Brazil and Uruguay which lasted a total of two and a half hours. The match was level after 90 minutes which prompted two halves of 30 minutes each which was the standard length for extra time in that era.

The worst goalkeeping performance at the Copa America came in 1942. Ecuador ‘keeper Napoleon Medina conceded 31 goals in total which is still the record for the most goals ever conceded at a tournament. He nearly broke his own unfortunate record three years later conceding 27 goals as goalkeeper.

Most goals in a match

Uruguay hold the longest unbeaten run in Copa America history when it comes to matches in a home nation. They have a record of 38 matches without being beaten in Uruguay which consists of 31 victories and seven draws. The last match they played in their own country was a 1-1 draw against Brazil in 1995.

The first 21 years of the Copa America saw no red cards in any of the matches. The first player to be sent off at the tournament was Juan Emilio Piriz of Uruguay when he was shown a straight red card in a match against Chile in 1937.

There have been a further 169 red cards in the tournament’s history.