Sportslens.com
Home Competitions MLS Can Charlie Davies make a comeback for the USMNT? 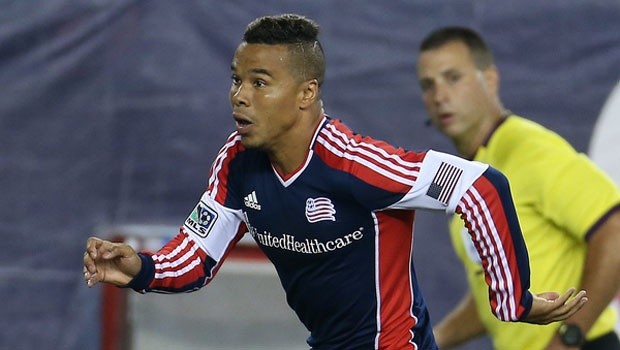 The once speedy and dangerous former U.S. international forward is beginning to find his form again.

It has been five years since Charlie Davies suffered the horrific car accident that almost robbed his life. Now the former speedy and physical USMNT forward is starting to show his old form with the New England Revolution.

On Oct. 13, 2009 Davies life was left in the hands of doctors, after a car accident he was involved in, left him in critical condition and took the life of 22-year-old Ashley J. Roberts in the process. Luckily for the 28-year-old forward, he survived the numerous surgeries and overcame the difficulties of rehab.

At the time it seemed like a miracle that Davies was back on the field in less than a year. He was back practicing for his Ligue 1 side, FC Sochaux, however, that is where the Cinderella story ended with his French club. It was clear that the New Hampshire native was eager to get back on to the national team and play in the 2010 World Cup in South Africa.

Before the injury he was a big part of the Yanks qualifying to the World Cup, in fact the last game he played for USMNT was a road victory against Honduras in San Pedro Sula on Oct. 10, 2009. The 3-2 victory that he started in would clinch the U.S. their ticket to the World Cup that following summer, he looked like a guaranteed starter for the World Cup.

Three days later everything changed of course, and the only thing guaranteed for Davies was that the next five years were going to be a frustrating struggle for the once promising forward for the Stars and Stripes.

However he did have some success when Sochaux loaned him out to DC United in 2011, he scored 11 goals in the only season he played for the Screaming Eagles. However, instead of United signing him to a permanent deal after the loan ended, he would end up back in France and in the dugout for another year.

After his contract ran out with Sochaux, he found himself in the Danish Superliga playing for Randers FC in 2012. He would struggle there as well, though he did get playing time as he made 23 appearances for the club, he failed to find the back of the net once.

In 2013 Randers sent Davies back to Major League Soccer on loan, but this time to the New England Revolution. In the brief loan, he only played in four games, but it was enough for New England Head Coach Jay Heaps and General Manager Mike Burns to sign the former U.S. international to a contract.

Now in the middle of the 2014 MLS season, Davies has begun to repay Heaps and Burns for taking a chance on him, by scoring three goals and getting two assists in just seven starts this season. His first start of this season arrived on July 19 against FC Dallas.

It only took him two games to get on the stat sheet, by getting an assist in his second start on July 30 against Colorado. Though it would only take the former goal scoring machine for the Red White and Blue three games to get his first goal since 2011 on Aug. 2 against the New York Red Bulls. Since that game he has scored two goals and got another assist in the Revolutions last four matches.

Davies has not slowed down his hot form, since on Sunday he scored the winning goal in their 2-1 comeback home victory against the Chicago Fire, where he displayed the vintage Davies, with speed and composure near the goal. (Here is the highlight of his goal against the Chicago Fire http://youtu.be/tYJbL5M9vXk, video provided by MLSSoccer.com.)

It is safe to say that Davies has turned a corner in his career since the horrific car accident of 2009, now is he completely back though? Well that is a question that can only be answered with time.

Who knows, maybe if he continues his good performance he could get a call up for the Oct. friendly’s for the USMNT against Ecuador on the 10 and against Honduras on the 14. For all United States fans, the dream would be to see Davies score key international goals like the one he did against Mexico in the Estadio Azteca in World Cup qualification match in 2009 (Here is the link to that goal http://youtu.be/vjprunNnFl4, video provided by Telemundo.).

However, in the meantime Davies will continue his comeback tail against the Montreal Impact on Saturday. Where he could potentially be starting in his eighth game and score his fourth goal of the season against the Canadian side at home in Gillette Stadium.