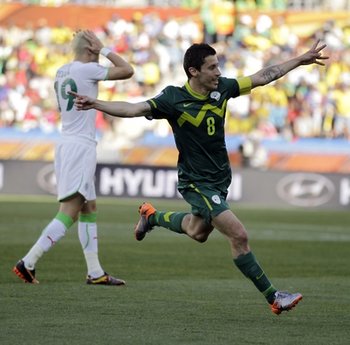 Slovenia would move to the top of Group C with a solid defensive performance and a timely goal late in the second half.

In the second half, there would be a few turning points that gave momentum to Slovenia. Abdelkader Ghezzal would come in for Algeria as a second half substitute and and pick up two yellow cards in less than 20 minutes. The second was a handball in the 73rd minute which put Algeria to only 10 men for the remainder of the match. With the advantage, Slovenia would take advantage with a goal from Robert Koren in the 79th minute.

Koren’s goal was a shot from outside the box that the goalkeeper nearly saved but instead he deflected it slightly before it went into the back of the net. It was a great victory for Slovenia who likely need only one win or a draw to have a chance to move into the knockout stage. Algeria’s chances are all but done to advance in the tournament.

Robert Koren scores the match winner for Algeria in the 79th minute on a shot from just outside the box.