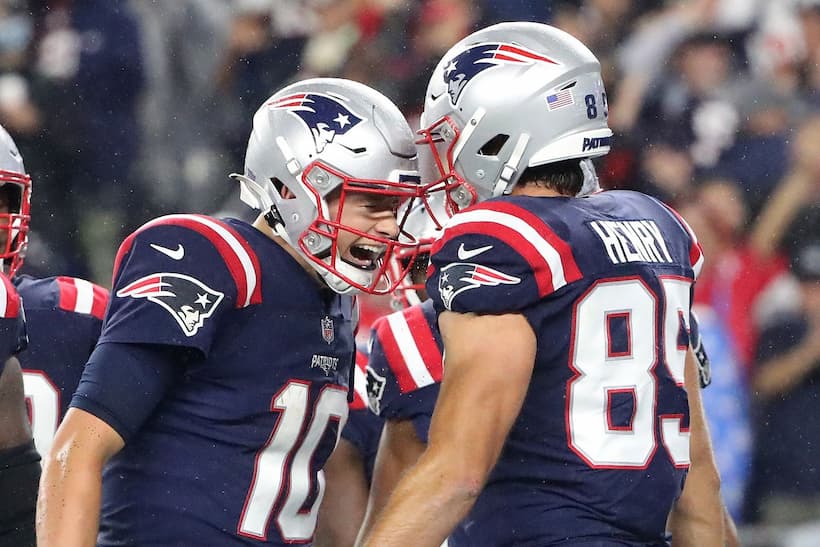 In this week’s edition of TNF: an NFC vs AFC Conference clash between Atlanta Falcons (4-5; NFC South) & the visiting New England Patriots (6-4; AFC East).
For a full preview, the latest odds, and free Thursday Night Football picks for the game, read on:
Falcons vs Patriots Odds
Below are the latest Falcons vs Patriots odds as broadcast on BetUS, plus our most likely wager on the BetUS prop market:

Bet on Falcons vs Patriots at BetUS

Having won four straight games vs the Jets, Chargers, Panthers, and Browns, New England Patriots are now the form team in the NFL. Bill Belichick’s team looked like a genuine contender when beating the Browns 45-7 on Sunday.

In that game, rookie QB Mac Jones continued his impressive form, going 19/23 for 198-yards and three TDs. Jones put in an accurate passing performance that the GOAT himself would have been proud of.

Jones’ rookie teammate Rhamondre Stevenson ran +100-yards and powered his way to two TDs against an off-color but typically stern Browns defense. TE Hunter Henry kept up his excellent early-midseason form, registering his fifth TD in as many games. And the Pats defense is not a proposition many teams will be looking forward to over the winter at Foxborough either. Matt Patricia’s new-look defensive unit is gelling now, and LB Matt Judon (9.5 sacks; tied-4th NFL) is surely an early contender for defensive POTY.

Atlanta Falcons fans went from heaven to hell in seven days. After beating their big rivals New Orleans Saints on the road, they went on to get taught a lesson by Dallas Cowboys. The Dirty Birds lost 43-3 and that score flatters Arthur Smith’s team. Dallas finished up scoring early in the third and took their feet off the gas pedal significantly for almost half the game.

It was a much-depleted performance to the one that saw the Falcons snatch a win at the Super Dome a week earlier. But, inconsistent as they are, we’ve seen enough of the Dirty Birds this season now to identify their strengths:

Matt Ryan was off-color vs Dallas but can still throw the ball with the best of them. RB/swiss army knife Cordarrelle Patterson struggled against the Cowboys but has amassed 776-yards from scrimmage and seven TDs this season. The former Bear is a unique blend of speed, reactions, and power that needs constant defensive attention. The Saints had no answer to him at times.

Rookie TE Kyle Pitts looks the real deal for the Falcons, too. The former Florida standout has 606-yards and one TD. Bar injury, Pitts’ is on course to break Mite Ditka’s 60-year record of 1,076-yards, the most ever put up by a rookie TE in the NFL.

If the Pats allow Matt Ryan the time he needs in the pocket to hit Patterson and Pitts, it could be a long afternoon in coverage for the secondary. Exactly as it was for the Saints…

But, led by the inspired pass rush colossus that is the red-sleeved Matt Judon, it’s more likely that a Patriots’ pass rush that hit five sacks vs the Browns has themselves another big game.

For Atlanta, WR Calvin Ridley isn’t expected to feature as he continues his bid to return to full mental health. Hayden Hurst is another concern for the offense. The big TE injured his ankle during the defeat to Dallas and early whispers indicate Hurst won’t be fit to suit up.

As for the Atlanta defense, LDE Jonathan Bullard won’t feature vs the Patriots after being ruled out on Monday with an as-yet-unspecified injury. The Florida standout has missed recent games as part of the NFL’s concussion protocol.

TE Jonnu Smith won’t feature for the Patriots due to a shoulder injury. RB Damien Harris is set to miss out again as he continues his stint on concussion protocol. This is likely to mean more reps for rookie-star Rhamondre Stephenson.

On the defensive side of the ball, DE Chase Winovich could be set to feature again for the Pats after a month out with a hamstring injury.

If the Atlanta Falcons team that beat the Saints comes strolling out on Thursday Night, the Dirty Birds have a huge chance of pulling off an upset win on their home turf…

Having just watched the Falcons get blown out by Dallas 43-3, however, it’s hard to feel confident of Matt Ryan and co. pulling off said upset. Especially not against a Patriots side that’s picking up steam and rediscovering its identity, finally.

We’re backing the Hoodie’s much-improved Patriots to continue their excellent mid-season surge towards the top of the AFC East by picking up a big win on the road.

BetUS is offering a 125% first-time matched deposit bonus that’s worth up to $2,500 to anyone that signs up with the sportsbook in time for TNF: Falcons vs Patriots.

To claim your 125% deposit welcome bonus and get your Falcons vs Patriots free bets, just follow the simple steps below: