Manchester United have finally sealed a £6m season-long loan signing of Colombian striker Radamel Falcao. The Colombian will earn a reported salary of £190,000 a week which would cost the club at least £16m for one year; United have an option of buying him permanently next season.

Around 6pm last evening, Falcao arrived at the club’s training ground, where he undertook a medical and discussed personal terms. 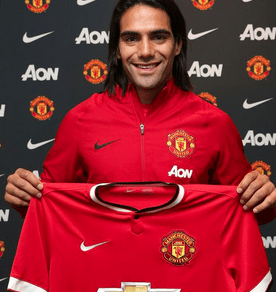 “I am delighted Radamel has joined us on loan this season,” United’s manager, Louis van Gaal, told the club’s website.

“He is one of the most prolific goalscorers in the game. His appearance-to-goal ratio speaks for itself and, when a player of this calibre becomes available, it is an opportunity not to be missed.”

The Guardian notes that since the player enjoyed a tax-free salary in Monaco, while United have denied to match his net take-home of £10m a year; it could be possible that Monaco agreed to pay the 50% tax  so that the striker doesn’t suffer any lost earnings.

“I am delighted to be joining Manchester United on loan this season,” Falcao said.