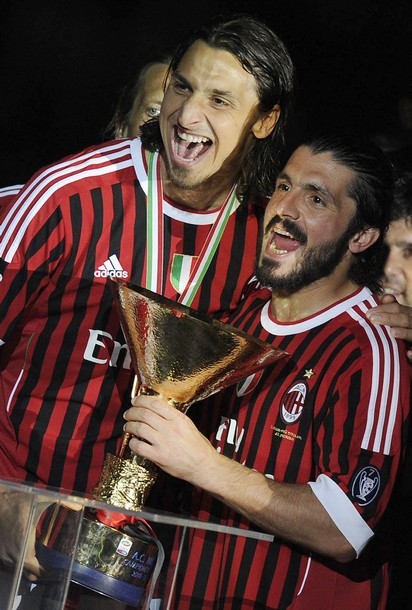 Zlatan Ibrahimovic was Silvio Berlusconi’s marquee signing last summer in a bid to discontinue Milan’s seven year drought without a Scudetto. Not only has the big Swede taken to Italian football like a duck to water as he did with rivals Internazionale prior to a brief spell in Spain, he has forged a formidable understanding with Robinho and Co that has seen them rise to the summit of Italian football once again.

Last week’s 0-0 draw in Rome clinched the Rossoneri their 18th Scudetto with celebrations reaching a wonderful climax last night with a 4-1 victory over Cagliari, prior to the handing over of the trophy to captain Massimo Ambrosini.

Big Ibra was presented the question of whether or not he believed Milan would end up winning the league? To which he replied “from the first day”. He had every right to be confident as his latest league triumph is his eighth on the bounce.

We take a look back at the eight championships he has won, that have spanned across three countries with five different clubs. An astonishing feat by Milan’s new darling.

Ibrahimovic had won an Eredivisie two years prior when Ronald Koeman began imbedding him into the Amsterdammers setup.

In his final season at the club his 13 goals in 22 appearances played a huge part as they pipped PSV Eindhoven to the post.

His transfer to Serie A was rather abrupt. He had played three games for Ajax at the beginning of the season netting three goals in the process, before an altercation with fellow teammate Rafael van der Vaart during an international match led to his sudden move to Turin.

The Old Lady shelled out €16million on their man and got a return of 16 goals in 35 league appearances.

The following campaign would culminate into the darkest period of Juve’s history.  They clinched the Scudetto with a monumental haul of 91 points, just three ahead of closest rivals Milan. By Ibra’s standards, his goal return was poor and only netted seven goals. In his defence his role was altered by Coach Fabio Capello who made him more of a team player than a target man.

However, the Calciopoli scandal had occurred and hit Italian football like a sledgehammer. Juventus’ role resulted in them being relegated to Serie B and stripped of their last two Scudettos. That also meant all of the Juventus players who had participated in those championship winning campaigns, were stripped of theirs.

Juve’s relegation resulted in an exodus of their star players – including Zlatan who moved to the Nerazzurri for €24.8million. Ironically Inter were awarded the Scudetto that Juve had been stripped of the season before.

Inter coasted to their first outright title in 17 years with Ibra netting 15 goals in the process – thus becoming the club’s top scorer.

He outdone himself the following year with 17 goals as Inter clinched their third straight league title in a tightly contested battle with Roma.

His brace on the final day against Parma ensured another season of the black and blue adorning the Scudetto patch.

Roberto Mancini departed as coach and in his place arrived Jose Mourinho who got the very best out of his star centre-forward. Zlatan consolidated his best league tally to date with 25 goals in 35 appearances and securing the Capocannoniere (Serie A top goal-scorer).

In what was his best ever season in Italy turned out to be his last, as a big money move to La Liga loomed.

He made an eye watering transfer in a deal worth €66million to Catalan giants Barcelona in the summer of 2009. In what would be his one and only season in Spain, resulted in 16 La Liga goals. The Swede was harshly criticised as many felt he failed to adapt to his new surroundings, but that did not stop him finding the goals and end up with an impressive return – along with a Spanish league title.

A return to Italy occurred the following year with Milan in a €24million deal. This season he has been in instrumental form, being a huge key in the club’s rise to the top of Italian football. In his inaugural campaign he has netted 14 Serie A goals, as well as incorporating himself into a valuable team player.

With Silvio Berlusconi flirting with the idea of another potential superstar arriving in the summer, the future is looking exceedingly bright for Ibra and the Milanese giants.