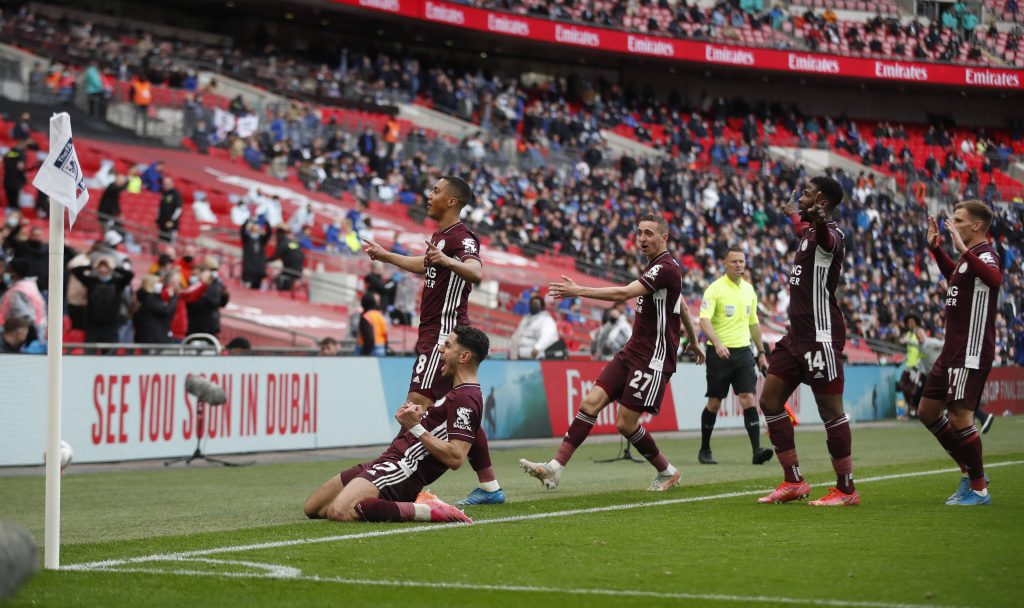 Chelsea came to Wembley looking to avenge last year’s heartbreak when they were defeated at this stage by Arsenal.

For their opponents, it was an opportunity to win this competition for the first time in their history. They have previously been runners-up on four occasions.

The first half was quiet. Both sides showed plenty of attacking intent, but the defences came out on top.

Werner put another shot wide, and Thiago Silva’s cross went just wide of the back post, with just a touch needed to find the net.

As for Leicester, Jamie Vardy had a shot blocked and another header wide. Caglar Soyuncu won two headers from set-pieces but was unable to hit the target with either.

The Foxes also lost centre-back Jonny Evans due to an injury on the half-hour mark.

The two sides went into the break scoreless. Chelsea dominated possession, but neither team managed to register a shot on target.

The second half began similarly, with neither side creating anything clear cut until the final 30 minutes. But once the game got going, it produced some incredible drama.

The deadlock was broken in the 63rd minute with a moment of real quality from Youri Tielemans. The Belgian picked up the ball in the attacking half and unleashed a stunning 30-yard strike into the top corner.

However, it was not without controversy. Replays showed that the ball hit Ayoze Perez on the arm. The Chelsea players complained, but the goal stood.

The Blues threw everything at finding an equaliser but were up against an inspired Kasper Schmeichel in goal.

The Dane first produced a fine stop to deny former teammate Ben Chilwell. He diverted N’Golo Kante’s cross towards the far corner, but Schmeichel got fingertips to it to turn it onto the post.

With injury time approaching, Chelsea thought they had found an equaliser. Thiago Silva floated an excellent ball over to Chilwell.

The England international touched the ball around Schmeichel and across goal, where Soyuncu attempted clearance struck Wes Morgan and ended up in the back of the net.

But the celebrations were short-lived. VAR stepped in to disallow the goal after replays spotted a narrow offside in the build up.

Chelsea continued to push but were unable to take it to extra time. Brendan Rodgers’ side won the game 1-0, securing the Northern Irishman’s first piece of silverware in England.

The two will meet again in the league on Tuesday in a game that could be crucial in the race for the top four.

Man of the Match – Youri Tielemans

Frankly, had the winning goal been a scrappy tap in or a deflection, this award would almost certainly have been given to Schmeichel, who produced two world-class saves to keep his side ahead.

However, a goal like THAT to win a major trophy? It’s tough to ignore that.

Tielemans was excellent in the middle of the park. Even when the Foxes were creating little going forward, he was the one who looked most likely to produce something.

And that’s exactly what he did. It was a breathtaking strike that gave Kepa Arrizabalaga absolutely no chance.

In terms of FA Cup final goals, it ranks well up there with Steven Gerrard’s strike against West Ham United in 2006.

A fine afternoon from a top-class player.

Both sides are involved in a tight race for Champions League football. Rodgers’ men are currently in third, with Chelsea just two points below in fourth.

Liverpool and West Ham United sit in fifth and sixth, putting pressure on the top four.

They meet in midweek at Stamford Bridge. If the hosts fail to win, they may risk dropping out of the top four.

Should that happen, it will put immense pressure on their Champions League final against Manchester City.

He has the opportunity to exorcise that demon on May 29, but he will come up against a Man City side who have just completed a domestic double. It promises to be an interesting match up.

These next three games could define Tuchel’s opening few months in charge.