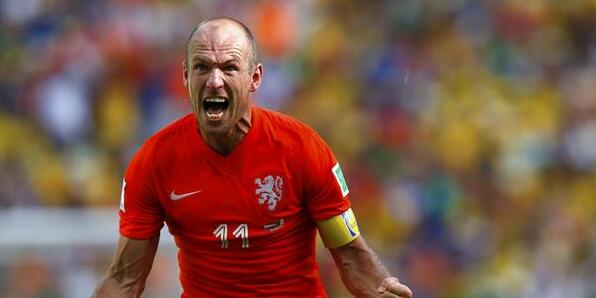 Arjen Robben: The best player at the 2014 World Cup, but you aren’t allowed to admit it

The sight of Dutch flyer Arjen Robben tearing at quaking defences in the South American heat has arguably been the most consistent highlight of the 2014 World Cup. The 30-year-old has picked up the man-of-the-match award in the four games he has played so far, has scored three times, and with last night’s penalty decision, has two assists to his name.

Along with Chile’s Alexis Sanchez and Colombian pair James Rodriguez and Juan Cuadrado, Robben has been my standout player at this tournament so far, and I’m firmly of the belief that he will emerge, when the dust has finally settled, as the joint-third best player in the world with Luis Suarez, behind Lionel Messi and Cristiano Ronaldo.

Crowned the fastest player on the planet for his grass-singeing sprint against Spain in the group stage, Robben is one of a select group of players that is so hard to stop going through the gears that it almost unfair for opposition defences when he gets into his stride, carving his own game into the structure and tactics implemented by despairing managers.

But sadly, the unfairness of Robben’s existence extends far beyond the complementary and, as we very well know, often descends into the illegal and unjust.

Arjen Robben is very well known for his simulation on the pitch, and it was his penchant for this that saw Holland win their decisive injury time penalty in the 2-1 over Mexico yesterday.

The world has reacted with absolute fury, condemning the Dutchman for his ‘cheating’, with some even calling for a retrospective ban. Robben has come out and claimed his innocence, but he did admit to diving in the first half, which has seen him now come under FIFA scrutiny.

There is no doubting the fact that Robben, who was captain on the field at the time, is seen as a hero in the Netherlands, having enabled his side to snatch victory in the final seconds. But, like so many before him, he is now in danger of irreparably tarnishing his legacy with his antics.

‘Google’ is a fine thing, but when typing in some of the great names from football, it reveals the lasting impression they left on the sport, with the top searched associations nothing to do with their genius on the pitch.

While Luis Suarez cannot yet be mentioned in the same breath as Maradona and Zidane in footballing terms, he has already joined them in the rogues gallery; Arjen Robben, unless something quite drastic happens, is on course to join them.

Click on the predicted scores for the full match previews –

France 3-1 Nigeria – While the Nigerians will not make it easy for them, I expect France to secure passage to the quarters, with Benzema continuing to challenge of the Golden Boot in Brazil.

Germany 3-0 Algeria – I’m backing the Germans roll their opponents over in the Estádio Beira-Rio and book their place in the quarters, with Thomas Muller among the goals again.