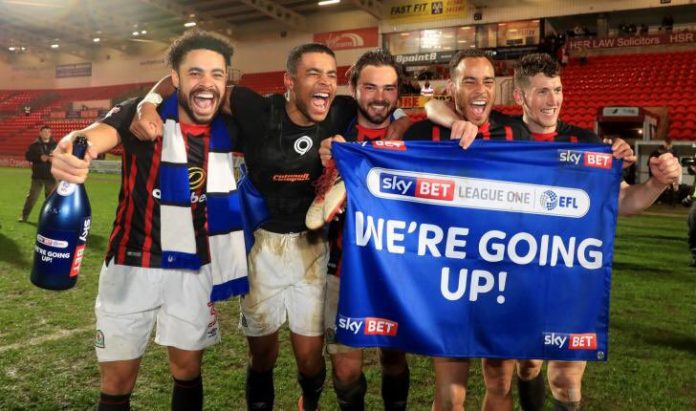 Good news stories can be hard to come by in football, with the sport often consumed by controversies, disputes or someone whinging on about something or other.

Tuesday’s 1-0 victory at Doncaster Rovers ensured Mowbray’s side secured promotion back to the Championship at the first attempt, but this season’s success goes much deeper than that not too inconsiderable achievement.

Rovers’ rapid demise under the ownership of the much-maligned Venky’s has been spectacular.

Sacking then manager Sam Allardyce when the team were in 13th place in the Premier League (be careful what you wish for Everton fans) in December 2010, was the first in a series of a disastrous decisions that threatened to cripple the club.

From the grinning idiocy that was Steve Kean, through to questionable appointments such as Henning Berg, Paul Lambert and Owen Coyle, Rovers lurched from one crisis to another.

A period of stability in between times under the hard-working and popular Gary Bowyer steadied the ship on the field for a while, but chaos still reigned off it.

Protests and boycotts became the norm for a fanbase whose connection with ‘their club’ had, in many cases, become permanently damaged.

Mowbray’s appointment at Ewood Park in February 2017 following Coyle’s departure from Ewood Park wasn’t universally welcomed by fans, but it didn’t take him long to get the majority onside.

Where the likes of Kean managed to alienate supporters, Mowbray quickly understood what it meant to manage a club like Rovers that is so firmly embedded within the local community.

Despite a strong finish to last season he was unable to prevent Rovers from dropping out of the Championship, but his ethos of hard work struck a chord with the club’s long-suffering fans.

Venky’s gave Mowbray their backing following relegation and he has overseen a huge turnaround in the club’s fortunes.

A run of just one defeat in the league since October 14 fired Rovers to promotion, with Mowbray’s calm authority and refusal to be anything other than honest a joy to behold following some of the madness that had gone previously.

Experienced players like Charlie Mulgrew and Danny Graham have flourished under his leadership, while signings such as Bradley Dack and Adam Armstrong have been inspired.

However, while promotion is undoubtedly sweet for the club, the work Mowbray has done in building bridges with a disenchanted fanbase is arguably even more important.

The 54-year-old has already admitted that he is aiming to build on what Rovers have achieved this season but, whatever happens in the future, the club’s fans should be forever grateful that Mowbray has rekindled their passion for something that many others tried so hard to destroy.

A return to the Premier League is probably still a long way off, but the fans have their club back and that matters more than anything.