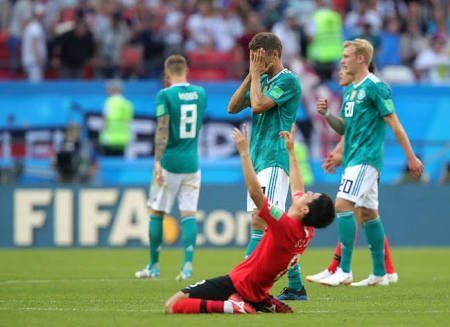 In most major football tournaments there is a big team that suffers a shock elimination in the early stages – but few people expected it to be Germany this time round.

The World Cup holders were eliminated on Wednesday after losing 2-0 to South Korea, with the inquest into what exactly went wrong already started.

There was no such slip-up from Brazil, who defeated Serbia 2-0 to top Group E and confirm a round of 16 meeting with Mexico.

The final group games will take place on Thursday, with England’s clash against Belgium the highlight.

Germany’s pre-tournament friendly results should have been an indicator into the team’s likely performance at the competition, but few paid much attention to a run of winless games.

The nature of their defeat to Mexico and last-gasp win over Sweden raised question marks, but few expected Die Mannschaft to have so many problems against a modest South Korea team.

Sweden’s 3-0 win over Mexico meant Germany needed to win, but the 2014 champions struggled to find the inspiration or attacking thrust to break the deadlock.

South Korea, who defended doggedly all afternoon, went up the other end to score twice in injury time and write their names into World Cup history.

Germany subsequently finished bottom of Group F and Joachim Low admitted his future as national boss was up in the air.

“It is too early for me to answer that question – we need a couple of hours to see things clearly,” he said.

“The disappointment is deep inside me. I couldn’t imagine we would lose to South Korea. I’m shocked because we didn’t pull it off.

“I’m incredibly disappointed. Where we go from here – we will have to take some time and talk about it calmly.”

Germany continue a run of the World Cup holders being eliminated in the group stages, with the same thing occurring at four of the last five tournaments.

Brazil secured top spot in Group E on Wednesday evening, dispatching Serbia 2-0 to book their place in the next round through goals from Paulinho and Thiago Silva.

The South Americans have been less than convincing in the tournament to date, with the Selecao not at their best in a draw with Switzerland and late win over Costa Rica.

However, Brazil looked much-improved against Serbia and will now look forward to a clash against Mexico.

One concern is the fitness of left-back Marcelo, who was substituted in the early exchanges with a back spasm.

Despite progression, Brazil manager Tite has brushed off his country’s favourites tag.

“We don’t live in expectations, we live in reality,” he said.

“Because we did so well during the qualifiers and friendlies we created an excessively high sense of expectation – but the World Cup in a new cycle.

“We are a team that withstands pressure, who have high-quality substitutes. We look at getting stronger and improving.”

Elsewhere, Switzerland drew 2-2 with Sweden to qualify and set up a clash against Sweden in the next round.

England and Belgium to lock horns

Both England and Belgium have had things predominantly their own way in Group G, with the European pair already through to the round of 16.

The sides will meet on Thursday night, in what will be a good indicator of the standing of the respective sides.

Both teams are expected to make significant changes to their starting XIs, with Romelu Lukaku confirmed as being injured for the clash.

Harry Kane looks set to play for England and Gareth Southgate has admitted his side want to build momentum.

“We want to win – that would mean we top the group and then we can move forward,” he said.

“I go back to the fact that we’re trying to develop a winning mentality and I can’t imagine a situation where I talk to the players about anything else.

“We’re building a team that everyone back home can see are passionate to play for England, that want to win every time they go out and are improving every time.”