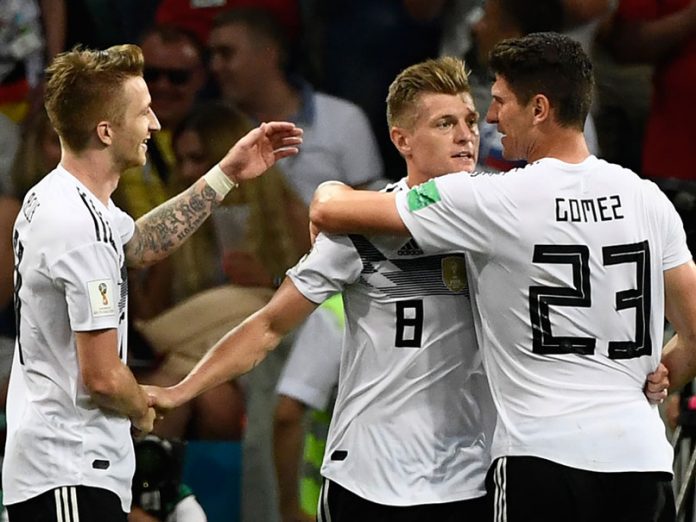 Today’s news focuses on the fallout of those games, with Joachim Low’s men accused of being disrespectful and a number of Belgian players injured against Tunisia.

Meanwhile, England are back in action on Sunday and Gareth Southgate has confirmed that a key man will play no part in the game against Panama.

After losing 1-0 to Mexico in their competition opener, Germany had the eyes of the world on them as they took on Sweden on Saturday.

Joachim Low made a number of changes to his starting XI, notably dropping Mesut Ozil, and the 2014 winners found themselves a goal down after Ola Toivonen’s sublime first-half strike.

The game looked to be heading for a draw after Marco Reus’ equaliser, but a 95th minute pile-driver from Toni Kroos saved Germany’s blushes.

“Some of the German bench celebrated by running in our direction and rubbing it into our faces by making gestures and that really got me annoyed,”, he said.

“We fight it out for 95 minutes and then you shake it out and leave so I was very angry. People behaved in ways that you do not do. This is probably the most crushing end to a game I’ve experienced.”

Germany are still not assured of a place in the round of 16 and will need to win comfortably against South Korea to book their spot in the knockout stages.

Belgium booked their place in the next round with a commanding 5-2 win over Tunisia on Saturday, with the European side playing some exhilarating attacking football in the process.

Despite the comfortable nature of the victory, Roberto Martinez’s men are now sweating on the fitness on a number of major players – with Romelu Lukaku the major concern.

The Manchester United striker, who scored twice in the win over Tunisia, has picked up external ankle ligament damage, while both Eden Hazard and Dries Mertens are also carrying knocks after the victory.

Martinez said Belgium would make major changes to their starting XI for the final Group G clash against England.

“The answer is very clear – if we could have seven days to prepare the game and then have seven days for the next game I would say carry on with the same starting XI,” he said.

“The reality now is that we are qualified, and in a tournament like the World Cup you’re only as good as the 23 players in your squad. There’ll be opportunities to give minutes to other players who deserve them. We need to assess the three injury concerns.”

England can book a place in the round of 16 by beating Panama on Sunday night, but Gareth Southgate is expecting a stubborn and robust opponent to make it difficult for his side.

One man that will sit out the game is Dele Alli, who has not recovered from a quad complaint picked up against Tunisia in time to feature.

Southgate has suggested the Tottenham star will be ready to play a role in subsequent games for England but would watch the Panama clash from the sidelines.

“This morning he followed the exact programme we had planned,” he said.

“He started training with the rest of the group and then did some more running on his own, so he’s progressing really well. We’re really pleased with where he is at, but he wouldn’t be ready for the game.”

You have a chance to win a 50-inch television by entering and winning Sportslens’ Predictor competition – sign up here.