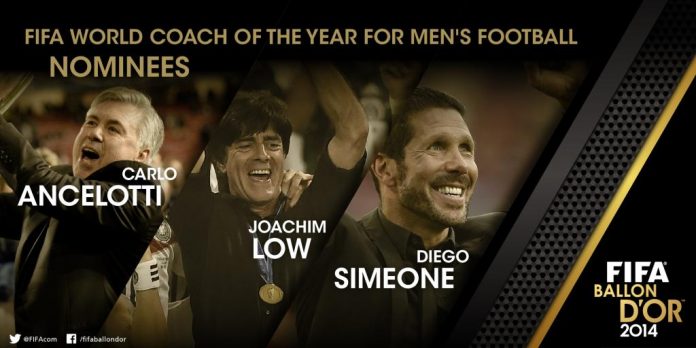 Below is a statistics comparison in the year 2014 between the 3 coaches shortlisted for FIFA’s Coach of the Year award: Carlo Ancelotti, Diego Simeone, and Joachim Loew. Ancelotti’s 3 main points going for him to win the award is the Champions League win (of course) which he achieved in dominating fashion, the fact that he’s likely to finish the year with 4 titles as Real Madrid compete for the Club World Cup in December, and the fact that he is the only coach in Real Madrid history to win 16 matches in a row. Joachim Loew’s sole and perhaps most important claim out of all the 3 coaches was quite simple the World Cup. The biggest prize in world football is the World Cup and Loew achieved it in scintillating fashion with a Germany side that was compact, entertaining, consistent, and most of all deserving of the title. Diego Simeone’s claim rests on the simple fact that he carried Atletico, a team that wasn’t even a ‘major player’ on the European scene, to the La Liga title over both Real Madrid and Barcelona. He also orchestrated their path to the Champions League final where they were just 2 minutes away from winning it, and finally the Supercopa win earlier this season vs Real Madrid.

All 3 of these coaches are very deserving of the award but who will get it? This statistical comparison included below isn’t a definit answer to that question but it may help you compare the 3 coaches statistics in the calendar year of 2014.