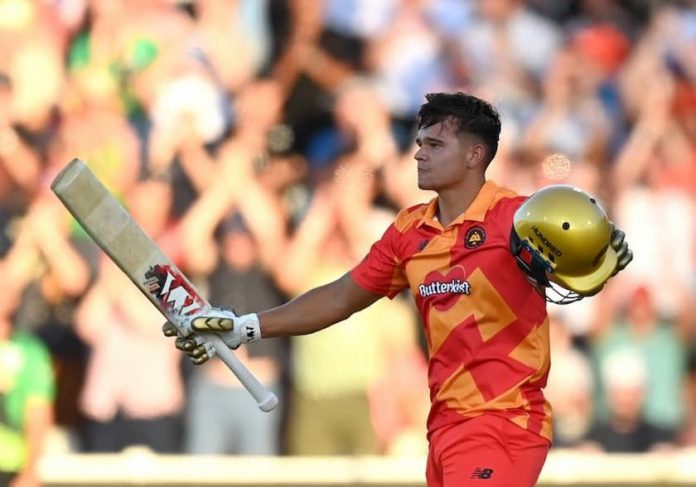 Will Smeed has become the first player to hit a century in The Hundred, after Birmingham Phoenix smashed reigning champions Southern Brave by 53 runs at Edgbaston.

On NHS Heroes Night in Birmingham, with workers and support staff invited along as a thank you, a 14,000 crowd was entertained by Smeed smashing an unbeaten 101 off 50 balls to help his side to a 176 for 4 win.

The previous record score in The hundred was 92 produced by team mate Livingston in 2021. Smeed handled the pressure well and with one run needed off two balls remaining, he scrambled to find two runs much to the crowds’ delight.

The 20-year-old’s performance was backed up by another young star in the making 22-year-old Brookes, who bowled a stunning spell in which he took five wickets for 25 run – only the third ever five-wicket haul in The Hundred’s short history.

Former white-ball cricket captain Eoin Morgan was impressed with the youngster’s performance and believes it could be a turning point for a new type of cricketer.

In an interview with Sky Sports Morgan said: “It’s a line in the sand for English cricket, he doesn’t play any first-class cricket, he is predominantly a T20 cricketer and is clearly exceptional in what he does. So it is potentially a new avenue for him into international cricket.

“We’ve seen in other competitions around the world where domestic franchise tournaments which attract big-name players create domestic heroes. Tonight Will Smeed has become one of them.”

The Birmingham Phoenix batter is the first to score a century in #TheHundred!#BBCCricket pic.twitter.com/tmRxN8MyuF

The creators of The Hundred will be delighted to see the hype around Will Smeed’s accomplishment after the controversy the format has faced.

Former cricketer David Lloyd believes that the format should be scrapped as the ECB are wasting their money. “This competition doesn’t fit,” he said. “It’s an extra jigsaw puzzle piece in English cricket that we don’t need. Nobody else in the world plays the format, it disrupts everything else we do.

“Look at the Hundred. Celebrity coaches. Really? What can they do? What do they do? The ECB are throwing away money. Nobody is interested in who is in charge of the Doncaster Dipsticks.”

However The Hundred is continuing to find success with young fans and families filling to stadiums to watch this new and exciting format.

With The Hundred very much back underway check out the best places to bet on the Cricket this season.