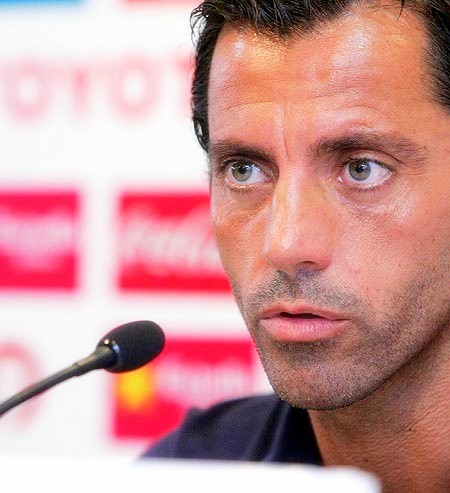 Al Ahli had fired their coach Ivan Hašek after a run of poor results in all competition. Losing from Al Shabab in the GCC Champions Cup ended the Czech manager 2nd stay with the Dubai based club who considered one of the top clubs in UAE Football.

In his first stay with Al Ahli from 2007 to 2009, Hašek could lead Al Ahli to the glory by winning the UAE President Cup in his first season and the Etisalat pro league the following season which gave Al Ahli the chance to play in 2009 FIFA Club World Cup. But things didn’t go well this season for Al Ahli’ hopeful management and fans as Hašek couldn’t find a way to improve his massive skilful squad and convert them into winners.

As a result of that, Al Ahli named Flores as their new coach to replace Ivan Hašek. The former Atletico Madrid coach was without a club since his departure from Spain due to his frequent argument with star striker Diego Forlán. The Spanish manager has a great CV. He took control of big clubs like Valencia, Benfica and Atletico Madrid where he won the UEFA Europa League and UEFA Super Cup.

I think Al Ahli made a wise decision in choosing Flores to replace Ivan Hašek. The Spanish manager is well-known of his attacking approach and Al Ahli fans can’t wait to see how their team will perform under the new management.

The club wouldn’t do the same mistake of last season when they kept former Leeds United manager David O’Leary for too long, so Hasek was dismissed after Al Ahli started the new season with just one win from their first five games, even with the recruitment of big-name stars Grafite, Luis Jimenez, Jaja Coelho and Youssef Mohamad. But this time, Al Ahli have trust in Quique to get the best out of the four stars and their Emirate team-mates.

Flores will have some headache in choosing his starting XI as Al Ahli squad is considered as one of the best in term of quality and quantity. Two good goalkeepers in Yousif Abdulla and ex-international Obaid Al Taweela, Experienced defenders like Mohammad Qassim, Lebanese Youssef Mohamad and Obaid Khalefa.

In the middle there are many names which any coach wishes to have in his team such as the flamboyant Ismaeel Al Hamadi, Chilean playmaker Luis Jimenez and promising youngsters Tariq Ahmed and Majed Hassan. The biggest force of Al Ahli can be found up front with Ahmed Khalil, best Asian Young Footballer of 2008, Grafite, 2009 Bundesliga Top Scorer, and Jaja Coelho.

Flores promised in his first press conference to bring Al Ahli back into the winning way. He also asked the fans to give him only one month to see the results of his instructions. He also confirmed that the mentality of the players will make the difference, in addition to the commitment and discipline in the training sessions.