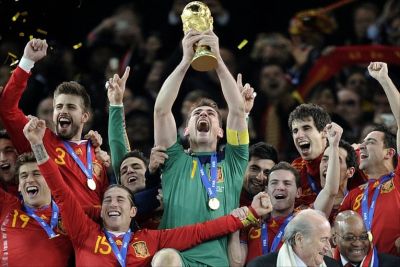 As the dust settles on Barcelona’s fantastic 3-1 demolition of Manchester United in the Champions League Final, and the national side recently so effortlessly thumped the United States 4-0, one thing is for certain – Spain are the best footballing nation in the world at this moment in time.

Spanish football’s contemporary success is hugely desirable: the national team are the current holders of both the European Championships and the World Cup, after victories in both 2008 and 2010 respectively. Spanish club Barcelona have won the Champions League twice in the last three years, and both Sevilla and Athletico Madrid have triumphed in the Europa League in the last five years.

Spain’s Primera Liga is producing fantastic, world-class players – every single player in Spain’s starting line-up for the World Cup Final belonged to a La Liga club. Eight of Barcelona’s first eleven for the Champions League Final progressed through the Barcelona academy. And for the last two years, the Ballon D’Or has been graced exclusively by players currently playing in Spain: Andres Iniesta, Xavi Hernandez, Cristiano Ronaldo, and current holder Lionel Messi. The standard set by the Spanish league can only be envied by their counterparts. Which begs the question – what makes Spain such a fantastic footballing nation?

Anybody who watched any of Spain’s action from the World Cup will know that their ball retention is second to none. The Spaniards made 3597 passes, more than any other team at a World Cup since 1966. In the final, their passing accuracy was 84.2%, Holland’s 69%. Xavi, Spain’s midfield maestro, was simply impeccable – the Barcelona man made 57 attacking-half passes, compared to Wesley Sneijder’s measly 21. Spain retained possession like their lives depended on it, waiting patiently for an opportunity to pierce the Dutch defence. Barcelona replicated this passing accuracy last Saturday, and Xavi again proved to be the master of his art, with 95% accuracy.

This tireless attitude to ball retention is coached in Spain from a very young age. Every Barcelona team, from the academy teams to Messi and co. incorporate a 5v1 possession game known as ‘El Rondo’ into their training sessions. The players on the outside, the Rondistas, must keep possession from the middle player, as he tries to intercept their passes. It breeds quick passing, short-distance sprinting, stamina, intelligence of movement and speed of thought. Xavi said recently that players recognise the ‘shame’ of giving the ball away, even in training games such as this.

In La Liga, 77.1% of players are Spanish, one of the highest percentages of all of the top European leagues. Of all twenty squads in the Premier League, less than 40% of players are English. Spanish teams prefer to nurture players through academies before spending money on foreign players. Teams scour the local area for talent, rather than abroad like many English teams do. These Spanish academies strive to be more than just a football team (hence Barcelona’s motto ‘Mes Que Un Club’), and instead act as a family to these young players, developing their lifestyle and attitudes into those of professional footballers. The importance of education is impressed upon young players by the club until they have completed their studies, and by the age of 17 and 18, many of these prospects are ready to progress into first teams, integrating alongside the more experienced players in the team. Daniel Pacheco, a Barcelona youth team graduate said recently ‘they look after you as a person, not just a footballer’.

Spanish clubs’ scouts search for talented, ball-playing footballers. Those who are bigger, stronger and faster than the rest may be desirable in England, but in Spain they are simply disregarded, unless they are technically able too. Young players develop their skills by playing 5-a-side with friends, where a quality first touch and faultless ball mastery lead to success. Because of the Mediterranean weather, children can play all year long in Spain, whereas their English counterparts are resigned to the indoors, losing opportunity to become better technical footballers. However, Spain share their climate with numerous other countries including Portugal and Italy, yet none of those have found success in the way Spain has done. So is there a difference in the aspirations, dreams and desire between these young Spaniards and all other potential footballers?

Maybe so. Young, talented footballers are often offered lucrative contracts by English clubs in order to be prised away from their Spanish academies, in the way Cesc Fabregas was. Yet Fabregas remains the player who can’t budge the likes of Iniesta and Xavi, the guys who refused to leave Spain, off their perch. In England’s second tier, players earn between £3,000 and £10,000 a week, nearly three times what a player in Spain’s Segunda Division would expect. But the willingness to stick it out, play in B teams in lower leagues in the hope that one day, they may just follow in the footsteps of Ramos, Xavi and Villa, is what makes Spanish players the best in the world. And that is why Spain will continue producing the world’s best players for years to come.