Portugal newspapers A Bola and O Jogo have covered separate articles on the ongoing Nicolas Gaitan transfer saga on Saturday.

A Bola insist that Manchester United are still in pole position to sign Gaitan. The club have had verbal agreement over the deal while Gaitan’s agent also spoke about a pending negotiation with the Old Trafford club.

The newspaper say that United present the best terms and offers for Benfica (way of payment) and to the player (high salary), but the club haven’t taken care of the Angel di Maria situation yet. The Argentine has impressed during the Copa America and he is all set to continue at the Old Trafford club next season. Manchester United could still sell him, provided they get a big money offer from either PSG or Bayern, two clubs heavily linked with a move for Di Maria. 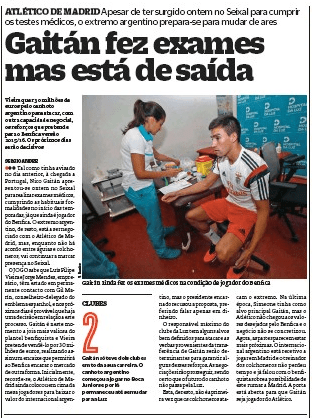 Atlético Madrid are in this race too, with Diego Simeone wants the Argentine to join Vicente Calderon this summer. The Rojiblancos too need to solve their own problems, especially the Arda Turan transfer situation, before going through the deal.

“I have a contract, I’m here and all I want to work as calmly as possible,” Gaitan, who has distanced himself from wild speculations over his future, said as quoted by A Bola.

O Jogo has covered the report from Atletico Madrid’s point of view. They have posted a picture, as you can see above, where Gaitan is undergoing a pre-season routine medical check up, for Benfica.

They add that Benfica’s president and Jorge Mendes have been negotiating with the Atlético’s representative, but no deal has been agreed yet.