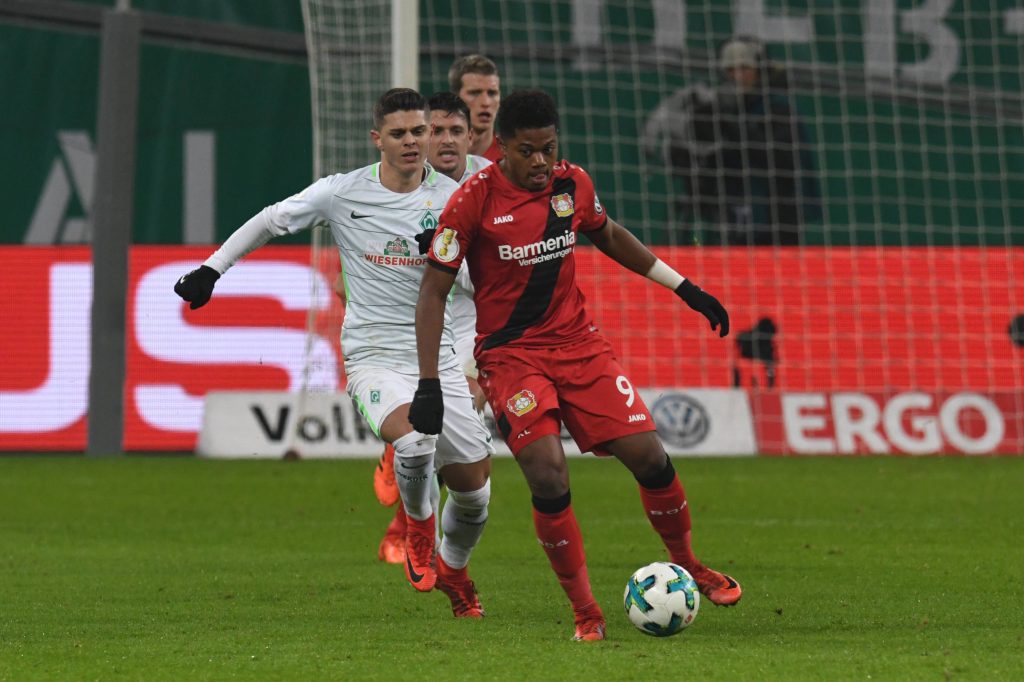 Ever since Manchester City lost Leroy Sané to Bayern Munich for €49m plus €11m in performance and trophy-related add-ons, they have been in search for someone to fill his shoes. Here are six such replacements:

After losing Sané to the Bundesliga, City may search the German top-flight to find a replacement for the 24 year-old. There, they will find Leon Bailey, Bayer Leverkusen’s big-game star. The Jamaican has 7 goals and 3 assists for Die Werkself after appearing 31 times. He certainly steps up when he is needed the most, and has scored 4 goals against the Bundesliga’s top three teams. He also netted in the first leg of Leverkusen last-16 tie against Celtic.

But that’s a part of the problem – 5 of his 7 goals have come in big matches. This means that he seems to forget his shooting boots when playing against smaller clubs, and with Manchester City, you rarely play against a club bigger than you. A big attribute to this is his poor finishing – he has a shot conversion rate of 19% inside the penalty area.

This lack of consistency has seen him fall out of favour, and Moussa Diaby has been preferred of late. He has even been fielded at left wing-back, but his defensive contribution is really poor, and he isn’t top-choice there either. Nearly half of his appearances this season have been as a substitute, and that will most probably be magnified in Manchester.

The 22 year-old isn’t quite a finished product, and will not be able to replace Sané by the looks of things.

Certain reports have suggested that City are eyeing a shock move for the 20 year-old, 6 years after Manchester United released him. The England Under-21 International has been consistent this season, scoring twice and providing 6 assists in 33 Premier League appearances this season. That may not seem a lot, but it is enough to put him joint-second in terms of goal involvements for Burnley.

His crossing is very strong as he averages 1.8 successful balls into the box per game. He can take set-pieces, and is good on the ball too – he completes 2.2 dribbles per match. All of these numbers do not seem too glorious, but when you consider the fact that he plays for a Burnley side that averages 43.3% possession, they start to look better.

As is evident by his lack of goals, the Rochdalian isn’t too great at finishing. From his 42 shots this season, he has a conversion rate of 4.76%, which is not great. Another deterrent for City will be the fact that he has only played as a left midfielder, and not as a left winger.

Burnley’s brightest young talent will have to take his game up a notch if he wants to fit in at City, but he is sure to improve under Pep Guardiola, and may prove to be a great investment for the Mancunians in the long run. Unfortunately for him, City are looking for an immediate replacement, and it doesn’t seem too likely that they will want his services in the near future.

Aston Villa’s captain, Jack Grealish has been a standout performer for the Villans this season. From 35 appearances, he has scored 9 goals and set up another 6, making him his side’s most potent attacker.

The 24 year-old holds on to the ball very well as he completes 2.1 dribbles per match, and gets fouled quite often too – nearly 5 times per match. His distribution is not bad either, as he picks out 2 key passes per 90, and has a pass completion rate of 84.8%.

But perhaps that is why he won’t fit in at City. The Cityzens don’t need players to hold on to the ball as they play a very attacking brand of football. What they want is someone who is quick, both with his feet and in his mind. Grealish is somewhat untested in those areas, and it would be a gamble if City were to move for him.

If Aston Villa get relegated, he might be available for a slashed price, but at the moment, it is United who seem to be in pole position to sign him.

Werder Bremen’s number 7 has scored 11 goals and assisted 5 in 34 appearances for Die Werderaner. The Kosovar is hot property right now, as many of Europe’s elite, including Liverpool and AC Milan, want his services. He’s a versatile player who has scored from the positions of a left winger, striker, and number 10.

His adaptability will certainly be appreciated by City, but they want a left winger. Luckily for them, that is exactly Rashica’s predominant capability, as he started 17 times on the left flank. He has a high shooting average of 2.6 shots per game, but he can also provide great passes, 1.4 times per average in a match.

The ex-Vitesse man has lived up to the club’s name’s translation (albeit from French) by clocking up speeds over 34 km/h. He makes good decisions in the final third, and should integrate into City’s style easily.

The problem for City has already been listed above – he is wanted by a lot of Europe’s top clubs. After helping Bremen out of the jaws of relegation, it appears obvious that he will be looking for a move away from Werder. A bidding war is set to ensue, but who will win?

Ah, nobody. One of the brightest talents in all of world football, he boasts of 0 goals and 0 assists from as many starts. Absolutely phenomenal.

In all seriousness though, the point is – City do not need to replace Sané. They have talented players like Riyad Mahrez, Raheem Sterling, Bernardo Silva, and Phil Foden who have starred in wide roles this season. Angeliño, who will probably return from RB Leipzig as his loan spell ends, can also play as a left winger. Better yet, 17 year-old Jayden Braaf has recently been called up to train with the first team, and is set to appear soon.

If they do not want a repeat of Jadon Sancho, it is clear that they do not need to sign a replacement. Unless…

Mr. Nobody’s greatest nemesis has been absolutely stellar this season, as he has racked up an impressive tally of goals and 9 assists after spending 2787 minutes on the pitch. He can play anywhere in a front three, and has scored or assisted from each of those positions.

His link-up play is great, as he makes 1.5 key passes per 90 minutes. In that same duration, he averages a mind-boggling 6.6 completed dribbles – a Premier League high. He loves a clinical striker as well, and has set up 8 goals for Raúl Jiménez, another league-topping stat. Manchester City also have a hitman of their own who seems to be half-decent, this guy called Sergio Agüero. Traoré would settle straight into the City squad with his help.

The La Masia graduate looks like the ideal Sané replacement at first glance. When you look again, I daresay he seems even better than the German. The ex-Schalke man has recorded a top speed of 35.04 km/h, but Traoré was reportedly clocked at 37 km/h once! If that is true, he would be the fastest footballer in the world. His physique and pace mean that when he is at full tilt, he is simply unstoppable.

If City need a reminder of his qualities, they should think back to his 3 goals and 1 assist against them this season – a tally which helped Wolves do the double over the former Champions. He is valued at €80m, and is worth each penny. City will have to battle the likes of Juventus, Barcelona and Liverpool if they want his services, and looking at his quality, they probably should.

All said and done, in my view, City do not need to replace Sané. They have a lot of talented players in their ranks, and should not look to expand their squad beyond it’s capacity, otherwise they may risk losing some great players (think Jadon Sancho), and then regret it later. They should use their finances to sign a strong centre-back, and perhaps a left-back (again). The one exception to this would obviously be Adama Traoré, who is being eyed by all of Europe, and for good reason. Let’s see what the Mancunians do.