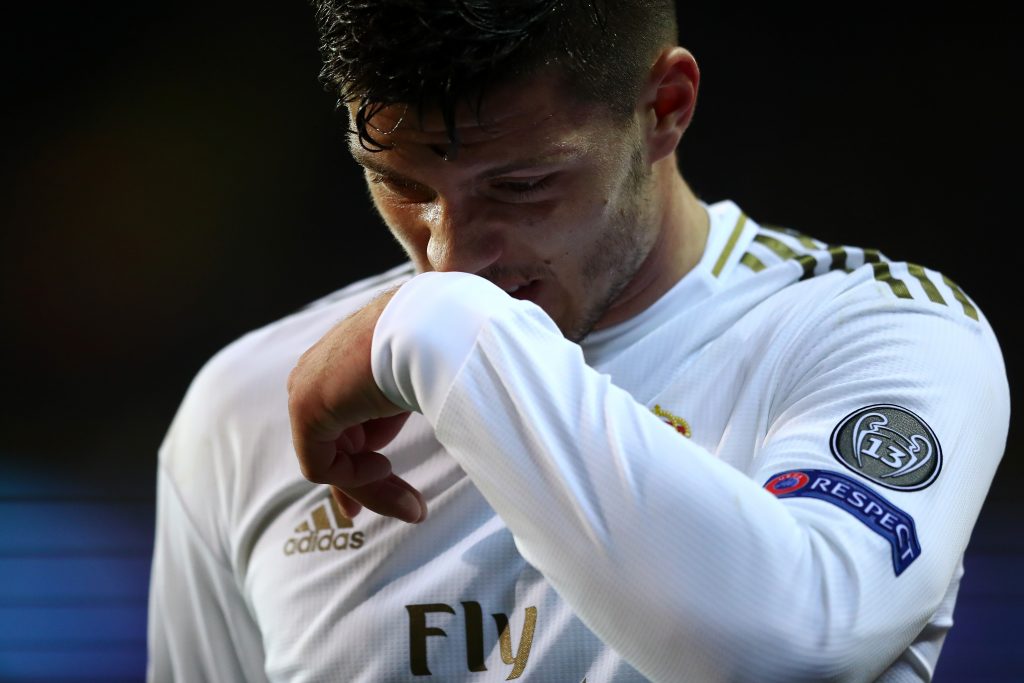 After lighting up the Bundesliga and Europa League with Eintracht Frankfurt, Luka Jović has failed to have a similar impact in Madrid following his €60m transfer. He has also been guilty of some questionable conduct, and has fallen firmly out of favour. The young Serb has only started 8 times in all competitions for Madrid, and has been forced to come off the bench most of the time. In his 24 appearances for Los Blancos, he has only scored twice and set up a goal once. Now, Madrid are preparing to offload him. Reports suggest that he may be available for as little as €35m, so let’s take a look at his potential destinations:

After their transfer ban was lifted, Chelsea seem to be linked to every single player who is available. Certainly, they have the finances to buy anyone they want to, but at the end of the day, only 11 players are allowed to start a football match.

And that is why Jović should avoid a move to Chelsea. The Blues have Tammy Abraham as their main striker, and Olivier Giroud just signed a contract extension which will keep him at the club for next season. To add to that, Timo Werner is inbound. Oh, and Michy Batshuayi is still at the club, but he’ll probably be on his way out so let’s not worry about him. Still, that’s three strikers at the club – a club which, under Frank Lampard, play a 4-3-3 or a 4-2-3-1. Either way, there is room for only one striker in the starting lineup, and four players competing for one spot results in one or two being cast out.

What’s worse for Jović is that if Chelsea are going to sign yet another striker, it will probably be Kai Havertz (although he can play as a number 10 too). That will be even more competition for the Serb, and he should firmly stay away from the blue side of London.

Luckily for Jović, there is a red side in London as well. They go by the name of Arsenal, and haven’t been doing too well lately. It seems that they will be sticking to Mikel Arteta for at least the next season, and the Spaniard can be expected to conduct some good business in the summer.

Arsenal too have four options up front, but of these, two are generally used on the wings. Pierre-Emerick Aubameyang is often used on the left, and Nicolas Pépé has been completely converted to a right winger.

Of the two remaining options, Alexandre Lacazette looks to be on his way out, most probably to Juventus. Aubameyang’s future is shrouded in mystery as well because his contract expires at the end of next season, and there has been no progress on an extension amid rumours that the Gabonese wants to leave the club. This leaves young Eddie Nketiah to do the bulk of the goalscoring, and he will certainly need support.

If all the stars align, Luka Jović may be able to walk his way into the Arsenal team, but it looks like an uphill task for both the player and club.

It appears that Jović has a good chance of going to London, with at least three clubs from the city vying for his signature. His best bet in England’s capital is Tottenham, who are having a really mixed season in front of goal.

Although Spurs have used a host of players up front, including the likes of Lucas Moura, Son Heung-min, Dele Alli and  Steven Bergwijn, they only have one out-and-out striker – Harry Kane. Though the team did alright when he was out injured, Mourinho made it clear that he wanted a striker.

After the January transfer window, he said, “We don’t want a striker to just help us now. We want a striker to be good for our future.” Jović is young, and may fit the bill. But at the same time, he will have a strong amount of competition to deal with, and may find life slightly difficult.

After the title-winning high of 2016, Leicester flirted with relegation for a couple of seasons, before shooting straight back up to the top-four. Under Brendan Rodgers, they clearly look like a very strong side, and should start attracting big-name players soon. Buying a player, even an outcast, from Real Madrid will surely be a big statement of intent from the Foxes, and their best chance seems to be Luka Jović.

Leicester have played with two strikers lately, and their only options up front are Jamie Vardy and Kelechi Iheanacho. Ayoze Pérez has filled in at times, but that was more due to necessity rather than capacity. Their top-scorer for the season has obviously been Vardy, who has netted 22 times. In second place, Iheanacho is tied with James Maddison at 9. That is a big gap, and when Vardy has goal-droughts (like he did after the restart), Leicester’s performances seem to take a big blow.

Leicester have made contact with Fali Ramadani, Jović’s agent, and seem to be in a good position to sign the Serbian striker. But, they have serious competition, even from Italy:

The Rossoneri have looked good lately, but are not quite challenging for the Scudetto, mainly because they didn’t sign Zlatan Ibrahimović last summer.

Unfortunately for them, it seems that the Swedish striker may be on his way out. That leaves them with Rafael Leão and Ante Rebić up front, and they may be looking for another option. In fact, they even held a meeting with Ramadani, who represents both Rebić and Luka Jović. The former may play a crucial part in the deal too, because he was the Serb’s teammate in their Frankfurt days, where they shared a strong bond.

Maybe Jović just needs someone from his high-days to find his goalscoring boots, and that’s exactly what he gets at Milan. It looks like a win-win deal.

Jović is at that stage of his career where he just needs a massive gamble to pay off. If he becomes one of Newcastle’s first big-name signings, things may just start to go his way.

If (when) the takeover goes through, the Magpies will have a lot of money to spend. One position where they are in desperate need of an improvement is that of a striker. Joelinton has been a proper flop with just 4 goals from 40 appearances, Dwight Gayle only has 2 from 18 outings, and Andy Carroll hasn’t even found the net in his 19 games.

If the takeover is completed and Jović makes the move, he may find himself strolling into a starting lineup with players such as Phillipe Coutinho and maybe even Gareth Bale.

It certainly is a huge risk as he needs a lot of things which are beyond his control to go his way, but if it pays off, Jović’s career will take off for the second time.

Jović has a lot of suitors lined up at the moment, mainly coming from England. The 22 year-old has a lot of time ahead of him, and should weigh all of his options carefully before making the move to rekindle his career. No matter where he goes, one thing seems certain right now – Luka Jović will not be a Real Madrid player for too long.