The fates of Cristiano Ronaldo and Kaka may have been decided in the space of a week but with over 2 months still to go to this summer, there’s plenty of time for more ‘superstar’ signings to take place.

Here’s a list of the top 5 transfer targets (left standing) this summer – will they move clubs, stay loyal or sold to pay off debts? If they do end up moving, where will they move to? While it may seem that after Madrid, Manchester City and Chelsea, the rest of Europe doesn’t stand a chance at getting these five, but not everyone goes to Madrid, or for the money (hopefully).

5) ALEXANDRE PATO – The 19-year old Brazilian striker is highly regarded as one of the brightest talents in both European and world football. Pato joined milan in the summer of 2007 from Brazilian club Internacional.  It didn’t take him long to prove his worth as he scored his first Milan goal on his debut against Genoa in a 2-0 victory.  He ended the season with an impressive nine goals in 20 appearances.

He has since played 54 games for the club with an impressive 24 goals.  David Beckham, who had a loan spell at Milan is one of a number of admirers of the young Brazilian labelling him ‘‘one of the brightest talents in the world”. Pato has also made a number of appearances for the Brazilian national team and scored his first goal for the national side on his debut against Sweden at the Emirates Stadium in 2008 beating Pele’s record of scoring a goal within seconds of making his debut.

Carlo Ancelotti’s appointment as Chelsea manager has fuelled speculation of a reunion between the two, with Chelsea reported to be ”very keen” to land the player.  However Barcelona and Real Madrid could also be tempted to snatch the star if given the opportunity.  Pato himself has expressed his desire to see out his contract with the Azzurri club.

4) DAVID SILVA– A Spanish winger who is both versatile and skilled, Silva has the rare ability of being able to play on either wing.  Silva officially signed for Valencia in 2004 but had loan spells at Eibar and Celta Vigo.  Since his return from Celta Vigo in 2006 the Spaniard has been a regular starter in the Valencia team and in 2007 signed a massive seven year contract, temporarily securing his future with the Spanish giants.  From the beginning of the 2004 season to the end of the 2006 season he missed only six matches but got injured with an ankle injury and missed a third of the last campaign.

Silva has a number of keen suitors around Europe including a number of English Premier League clubs.  Liverpool were thought to be at the front of the queue in the race to sign the winger with Liverpool manager Rafa Benitez thought to be using his association with the club as an advantage to snatch a deal however financial problems appear to have hampered his plans.  Real Madrid and Barcelona as well as Manchester United have since shown great interest. 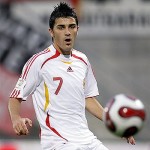 3) DAVID VILLA – Also a Valencia man, Villa has become regarded as the best striker in world football with a whole host of teams ranging from clubs in England, Spain and Italy wanting to land the 27-year old.  Villa has previously had stints at Sporting Gijon, and Real Zaragoza with impressive goal tallies.

In 407 club appearances, he has netted 204 goals, an impressive one goal every two games as well as 31 goals at international level.  The Spaniard has formed a strong international partnership with striking partner Fernando Torres and the two are often spoken about as the deadliest duo in all of Europe.

Villa himself has often expressed his desire to remain with Valencia, however the club’s astronomical debts have made the club think twice about holding onto their star asset.  Bids of up to £50m have been talked about with the striker recently being quoting as saying he wants to remain in Spain, alerting both Real Madrid and Barcelona.

2) KARIM BENZEMA – The French youngster has been heralded as one of the leading players in France’s new generation.  The Lyon striker was handed the prestigious number 10 shirt in the summer of 2007 after Sylvain Wiltord, Florent Malouda, and John Carew departed the club and the youngster was burdened with the task of leading the attack.  The Frenchman is said to be ”happy” at the club but having hit the proverbial glass ceiling at the French club, he now wants a new challenge.

The Frenchman’s 66 club goals in 149 appearances has seen him catch the eye of Manchester United manager Alex Ferguson who sees the player as a long term replacement for the departing Cristiano Ronaldo.  The Scotsman is contemplating using a large chunk of the £80m received from the sale of Ronaldo to land the player. Real Madrid have also been after Benzema, who stated his preference for Los Merengues last summer. 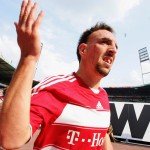 1) FRANCK RIBERY – Ribery was described as the ”jewel of French football” by Zinedine Zidane and it appears as though he is now the most wanted jewell in world football.  Surprisingly Ribery has had spells at seven different clubs including four in his own homeland.  His longest spell at a club was at Marseille where he made 60 starts between 2005-2007.  The Frenchman’s best display’s have undoubtably been at current club Bayern Munich where he helped them lift the Bundesliga in 2008.

Real Madrid are reportedly leading the chase to sign the winger as they look to establish the Galacticos II era under president Florentino Perez.  Ribery could be signed to line up along other Madrid accquisitions Cristiano Ronaldo and Kaka although a number of clubs in England including Manchester City, could yet have a say in the Frenchman’s future.

Where do you think these five will be playing come September?