India
Home News what next for harry 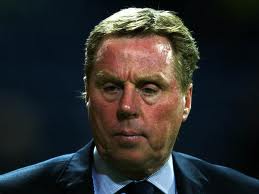 Sunday night saw the news that Harry Redknapp must have been dreading since that fateful February day when he was acquitted of not paying his taxes and Fabio Capello resigned in a huff over John Terry and god knows what else. Harry, the darling of the press was passed over for the job he dearly longed for. The cultured, multilingual, opera loving Roy Hodgson was approached by the FA and is on the verge of becoming England manager.

Reading the press you’d think this was a huge miscarriage of justice. ‘Arry, the ‘fans favourite’ has been cast in the tabloids as some Brian Clough figure who’s the best man for the job and been passed over for some fuddy duddy politically correct useless schmuck of a manager. Well Clough won two European Cups and two league titles with clubs he’d taken from the second division. Hodgson took Fulham to the Europa League final and has coached sides around the world. Redknapp’s barely managed a match in Europe and has gone as close to a league title as Eric Pickles has got to a Weightwatchers meeting.

It’s been quite disgraceful how people who are paid for their knowledge of football and ability to write eloquently have been so critical and insulting of Hodgson while praising Redknapp, a complete neophyte at international level and someone who almost boasts of his inability to do tactics or talk about the technicalities of the game. I take issue with newspapers saying Harry was the fans favourite for the job. I don’t believe this to be the case at all. Hodgson’s appointment has been received quite warmly on social media sites. Only in the press has the appointment been given a vitriolic trashing and cast as an awful decision that will be a disaster for the England team.

Whether it’s ‘kop flop Roy’, ‘oh why oh why oh woy’, comparing pictures of Hodgson to owls, or saying he can’t talk properly (because Harry Redknapp also speaks five languages and is a cultured, well read intellectual) he has been given ludicrously rough treatment. Tony Evans of The Times said of Hodgson his ‘bathroom cabinet is bigger than his trophy cabinet’. Given Hodgson’s bevy of league titles in Sweden and Denmark and Harry Redknapp’s one FA Cup and one Third Division title with Bournemouth to have a pop at Hodgson for not winning enough trophies is laughable.

Hodgson is more experienced than Redknapp through his stints managing Switzerland and Finland, has managed in five different countries, took Fulham to stunning victories over Roma, Hamburg, Juventus in the Europa League, and has done well talking medicore sides and elevating them which is useful for an England side missing two world class players in Jack Wilshere and Wayne Rooney for the first two games and which hasn’t reached a major championship semi-final in 22 years.

I think Hodgson is the right appointment for England and good luck to him. He’ll need it with the press angry that their man ‘Arry hasn’t got the job he and the press craved and England a struggling side unlikely to do much at the Euros. But for Harry, what now? The job he has said any Englishman would be proud to have, that surely he must have dearly wanted, has now gone.

What makes it difficult is that at Spurs, certainly amongst the fans and I would guess amongst the players, coaching staff and senior management was a general assumption that Harry was leaving. It may have been spoken only in hushed whispers in the corners of the training ground and in boardrooms, but it was quietly expected that Harry was to leave, a replacement to arrive and with Spurs set to have another summer struggle to keep the likes of Luka Modric and Gareth Bale a summer of change was to take place at Spurs.

Now Harry won’t be leaving to manage England, it’s very likely he’ll remain at Spurs. He has no reason to resign that the public know of, he is under contract so sacking him would be very expensive, and if Spurs finish the season strongly and hang on to 4th place there is little or no chance Harry being thrown out the Tottenham door. His popularity with the press and the kicking in the press Spurs would receive if Harry was to be forced out also makes it unlikely he’ll be forced out barring a catastrophic end to the season and a 5th or 6th place finish in the League from being 10 points clear of 4th in late February.

Harry staying at Spurs does bring about some difficulties. The effect ‘Harry for England’ has had on Spurs is debatable. I said in an article recently that I felt the mental fatigue caused by his court case and simultaneously managing Spurs had more of an effect than the talk in the press that he was leaving. I still believe that to be true. Nonetheless it must have had some effect. Danny Baker said that Spurs recently have been playing ‘like The Police when they found out Sting was leaving’. Man United struggled when Alex Ferguson announced his retirement and improved when he unretired and decided to stay on.

Whether people want him to stay at Spurs is another matter. I wrote last week he deserved the sack and should we finish the season poorly and finish outside the top four I will not change my view. Players were rumoured to have fallen out with Harry though in the easy win against a diabolical Blackburn any discontent that was rumoured to exist was not on show. The relationship between Redknapp and Daniel Levy hasn’t been a warm one for a long time now.

There are also a group of young, upcoming managers in the likes of Roberto Martinez, Paul Lambert, Brendan Rodgers, even David Moyes who have done superb jobs. It may not be much longer before those managers are plucked by bigger clubs, and if Tottenham want one of these bright young talented coaches, this summer could be the last where they would be at a smaller club and willing to manage a club of Tottenham’s stature. But will Harry leave or be forced to leave? I strongly doubt it.

My guess would be that Harry will remain at Spurs and be in charge at the start of the 2012-2013 season. Fans may not be especially happy with him and his management style but they’re hardly marching down Tottenham High Road calling for his sacking either. Sacking him would be an expensive, ballsy but risky move which would receive in the press the sort of criticism and abuse reserved for lame duck politicians. A resignation or a move to another club is very unlikely.

Expect to see him in the Spurs dugout at the start of next season.