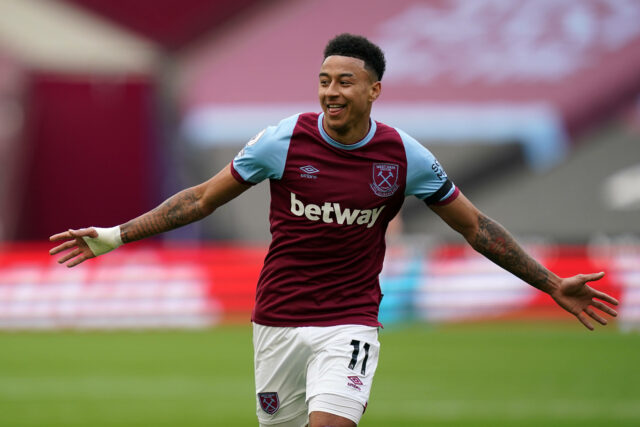 West Ham United fear Jesse Lingard’s injury could derail their chances of finishing the campaign in the top four, according to The Sun.

The England international is suffering from an ongoing issue and underwent intensive treatment on his legs throughout last week.

Manager David Moyes wanted to ensure Lingard was available for the game against Chelsea, and the Hammers boss is concerned he will not be able to face Burnley on Monday.

The attacking midfielder is still being hampered by the problem and struggled with it during West Ham’s 1-0 loss to the Blues.

Lingard pulled up a couple of times during the game and appeared to be limping at times.

Moyes passed it off as cramp, but it could be more serious, and his absence could deal a massive blow to the Hammers’ chances of playing in the Champions League next season.

With a week to go before their next game, Moyes will hope that the extra couple of days rest will help Lingard’s body recover.

The 28-year-old has bagged nine goals and four assists in 11 Premier League games since joining West Ham on loan from Manchester United in January.

Moyes is currently without Declan Rice, Michail Antonio and Aaron Cresswell, and he cannot afford any more knocks as the campaign enters its business end.

The defeat to Chelsea saw them drop to fifth, and they will be looking to pick up every point possible in their last five games.

Having Lingard available for those games would undoubtedly boost their top-four chances.

In other news, West Ham have been told how much to pay to land striker Moyes admires.