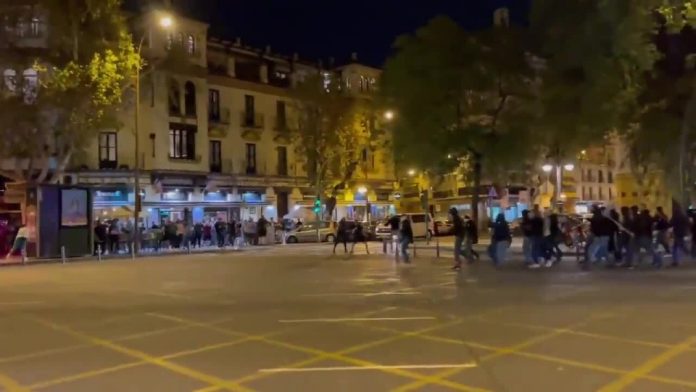 The fans of the Premier League side were in Spain last night ahead of their club’s face-off with Sevilla in the Europa League on Thursday and they were attacked outside a bar by the fans of the German club.

According to a report from Daily Mail, UEFA were aware of a potential clash between the fanbases and therefore they decided to bring forward the match between Real Betis and Eintracht Frankfurt by 24 hours.

Frankfurt won their game 2-1 against Real Betis on Wednesday night.

However, things did not go according to plan and the two sets of fans had a furious clash in the Seville city centre last night.

While the exact reason for the clash is unknown, the general consensus on social media is that it was a choreographed attack on the Hammers faithful.

Attack on English fans during European games has been quite common in recent seasons. Travelling fans of Manchester United, Manchester City, Chelsea and Liverpool have been in a similar situation in recent months as well.

Reports further stated that the Spanish police had to intervene and they used rubber bullets to get the situation under control as the violence escalated between the two sets of fans.

Meanwhile, West Ham will be looking to book their place in the next round of the Europa League with a win over Sevilla tonight.

It remains to be seen whether UEFA decide to take any actions against the fanbases after the events of Wednesday night.