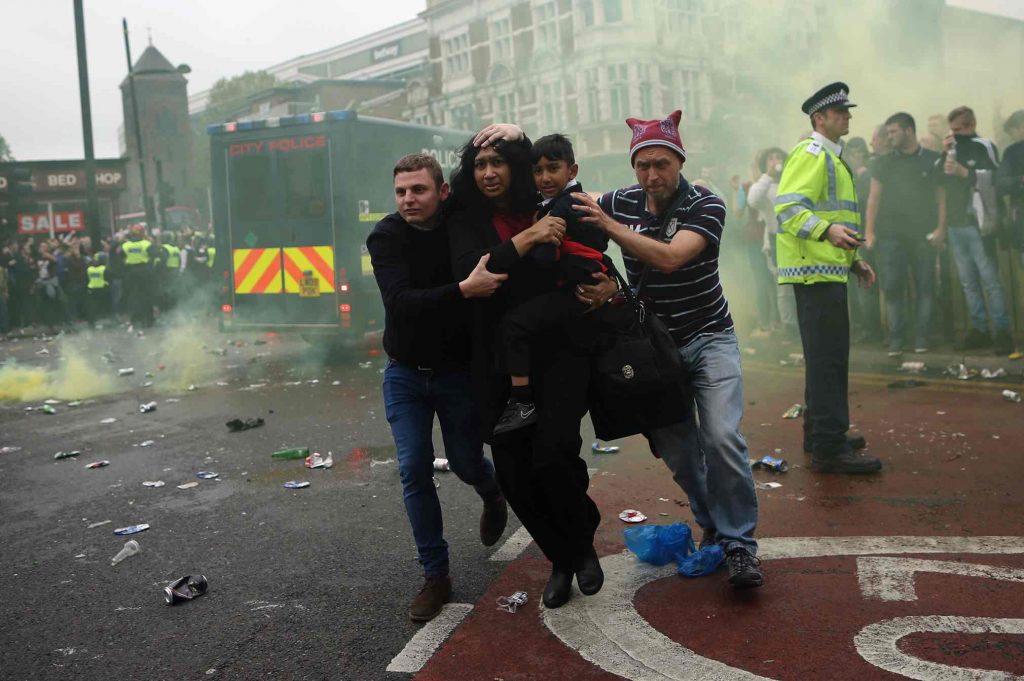 West Ham fans attacked the Manchester United team bus ahead of the teams meeting in the Premier League on Tuesday night, which marked the final game the Hammers will play at Upton Park.

Emotions ran high as the London outfit bid farewell to their home of 112 years, with a move to the Olympic Stadium this summer.

However, ugly scenes marred the occasion, with the United team bus caught in traffic congestion and set upon by the Hammers faithful.

Images of the Manchester United team bus arriving at West Ham for the final game at the Boleyn Ground. pic.twitter.com/ofja1HABgp

Objects were also thrown at visiting goalkeeper David De Gea after he celebrated a United goal, with a pitch invader also taunting the Spanish stopper towards the end of the game.

An official statement from the FA suggested that retrospective action could be on its way to West Ham.

“The FA strongly condemns the unsavory incidents involving both the Manchester United team coach outside West Ham United’s Boleyn Ground and objects thrown from a section of the home support during the game,” it said.

“We will work closely with both clubs and the Metropolitan Police to fully investigate these matters.”

United captain Wayne Rooney also condemned the actions of the West Ham fans and admitted it was not a pleasant thing to experience.

“It wasn’t nice. The coach got smashed up but we’re here now, so have to prepare for the game and go out and do our job,” he said.

“I’m sure you’ll see the images. That’s not for me to say but I think it was disappointing.

“We know it’s a big game for West Ham. It’s a big night for them, leaving the stadium, but I’m sure West Ham as a club will be disappointed with what the fans have done.”

Louis van Gaal stated that fan violence was a part of football and that the incidents should not have impacted upon his team’s performance.

“We live in this world,” the manager said.

“It is not the first time it happens. OK, I have a long experience in football but there are players who don’t have the [same] experience, so it shall have an influence.

“But we don’t need to have excuses. We chased the match in the second half and we were 2-1 ahead, so we don’t have to look for the excuse.”

The Club has issued a Statement on fan behaviour ➡️ https://t.co/LkeRAkRRQi #WHUFC pic.twitter.com/PpgzKZ1Lrt

West Ham vice-chairman David Sullivan, completely ignored video and photographic evidence, claimed that the incidents was blown out of proportion and bizarrely blamed United for the situation.

“It is depressing really,” he said.

“It will be a late night for our fans and some of them won’t be able to stay. I don’t understand why United couldn’t get here at 4pm. They could have got here early.

“They knew it would be busy. It’s crazy. There was congestion in the street and they couldn’t get the coach in. There were people around the coach but there was no attack on the coach.

“If you check the coach there won’t be any damage to it. If we arrived late at Old Trafford they wouldn’t put the kick-off back. Man United should have got here at 4pm.

“They made the same mistake at Spurs. I’d make them kick off at 7.45pm. The police have been kind to them.”

Diafra Sakho gave West Ham the lead in the early exchanges, before an Anthony Martial brace in the second half put United into the ascendancy.

What a night to remember thank you to all the fans and to the Boleyn ground for all the memories !#COYI pic.twitter.com/XyYclv9SP2

However, the Old Trafford side’s chances of a top-four finish were critically damaged when Michail Antonio levelled things up and defender Winston Reid acted as the unlikely hero to score the winner.

United must now hope that local rivals Manchester City drop points on the final day of the campaign away to Swansea City to have any chance of playing in the Champions League next season.