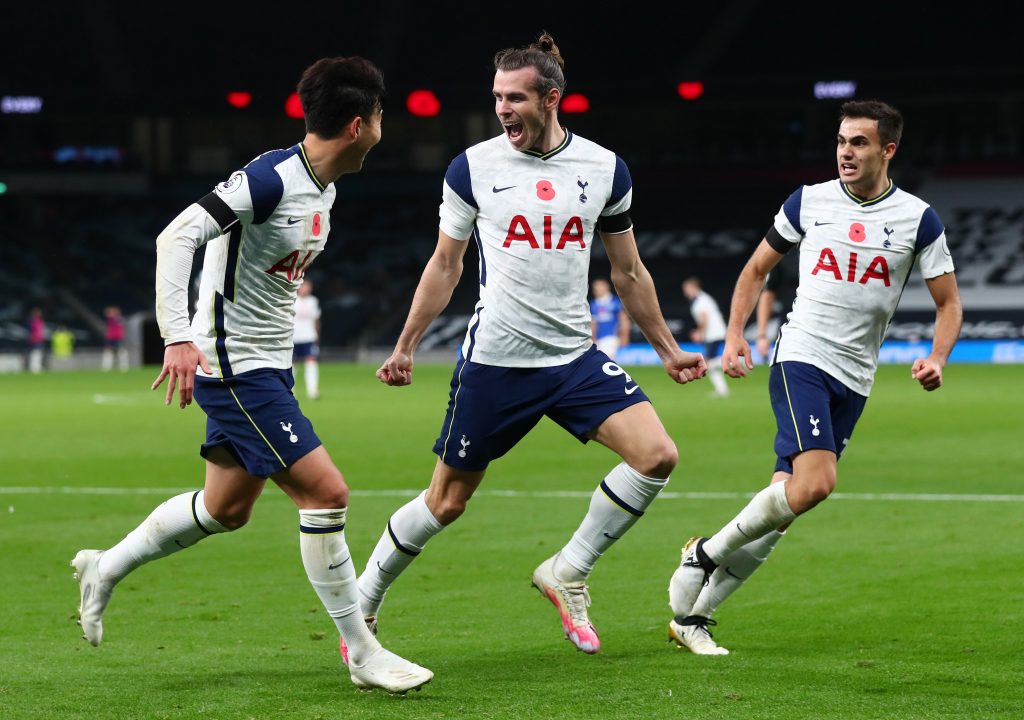 After a two-week-long international break, domestic football finally returns this weekend, with plenty of live football to stream online for fans.

We have two huge clashes in England, with Liverpool hosting Leicester City at Anfield, who currently sit a point above the Reds in first place.

Over in North London, Tottenham Hotspur can potentially move into top spot in England if they can take away three points from Manchester City, who also desperately need a victory.

Over in Italy, unbeaten AC Milan will look to continue their torrid start to the term as they face Napoli, who have impressed thus far under Gennaro Gattuso.

In La Liga, Real Madrid can move into second place if they can grab a win against Villarreal.

Lastly in Germany’s top flight, Eintracht Frankfurt will host RB Leipzig in a fixture that may look one-sided on paper but should create lots of excitement.

The Reds will host the high-flying Foxes to Anfield on Sunday as they look to take over first place from Brendan Rodgers’s side. It will be an absolute dog-fight for Liverpool though, as they’ll be without numerous key players from injuries over the international break.

Virgil van Dijk is still missing from a knee injury he suffered last month. But on top of that, Jurgen Klopp is also now without both Joe Gomez and Trent Alexander-Arnold.

Andy Robertson dealt with a minor hamstring issue on duty with Scotland and is questionable for this weekend’s clash, while Mo Salah has tested positive for coronavirus again.

Diogo Jota will start up top in place of the Egyptian and enters this fixture in fine form, having scored six goals in his last five appearances for the Merseysiders.

The Reds will also get back Thiago and Fabinho in the middle of the pitch, which is certainly a boost to their squad ahead of such an important clash.

Leicester are off to a tremendous start this season, currently 6-0-2 and topping the Premier League table. They’ve won six straight matches across all competitions and three straight in England, securing victories against Arsenal, Leeds and Wolverhampton Wanderers.

Jamie Vardy has been prolific in front of goal, already netting eight times, which puts him first in the scoring race. The Foxes have conceded just nine goals this season, thanks to the solidity of their backline.

Centre-back Caglar Soyuncu has been out for a while now but Frenchman Wesley Fofana has stepped in and done a wonderful job in place of the Turk. However, he could be out for this clash after picking up a knee injury before the international break.

Leicester haven’t beaten Liverpool since September 2017, but given their current form and the Reds’ depleted squad, they will be feeling extremely hopeful that a positive result could be in the cards this Sunday.

Tottenham welcome Manchester City to North London this Saturday in a very important fixture for both sides. Things finally look to be coming together for Jose Mourinho, leading Spurs to a 5-2-1 start, which puts them just one point shy of league leaders Leicester.

It’s been the Heung-Min Son and Harry Kane show early on for Tottenham. Son has already bagged eight goals and tallied two assists, while the Englishmen has been prolific in the final third, already scoring seven times and setting up another eight goals.

Between the two, the dynamic duo has had a hand in 15 of Tottenham’s 19 domestic goals. Spurs enter this tough match in solid form, going unbeaten in their last five appearances.

"I never expected to win this award because Harry has been fantastic all season and he completely deserves it."

The last meeting between these two English giants resulted in a 2-0 win for Tottenham, their first victory against the Citizens in six previous clashes.

It’s been a long time since City found themselves in the middle of the pack in the Premier League. That’s where they currently sit, in 10th place, after a dismal 3-3-1 start.

It’s not like they’ve played necessarily awful as a whole, City has just lacked a spark in the final third. Guardiola’s men have scored just ten goals in seven games, tying Liverpool 1-1 two weeks ago.

It’s safe to say that three points are a necessity this weekend against Tottenham in order to get themselves out of the gutter.

With each matchday that drifts by, City’s title hopes slowly wither away. Currently, six points off top spot, a win on Saturday will be a step in the right direction for the Citizens.

Napoli will be looking to end Milan’s unbeaten run when they face them at the Stadio San Paolo in Naples this Sunday. After finishing outside of the top six last season, Gennaro Gattuso’s men have come back with a vengeance through their first seven matches.

Napoli are currently in third place in the Serie A table and with a victory this weekend and a Sassuolo defeat, they would move into a two-way tie for top spot with Milan.

Gli Azzurri is in the top five of numerous categories in Serie A, including attempted and successful tackles, goals per game and shots on target.

Summer signing Victor Osimhen has impressed in the final third, also scoring two goals. He looks to be a game-time decision this weekend though as the Nigerian is dealing with a minor shoulder issue.

Milan have been the talk of Europe. They failed to bolster their squad defensively in the summer, which seemed to one of their weaknesses.

But, they’ve actually looked spectacular, going 5-2-0 in Italy which puts them at the very top. Zlatan Ibrahimovic has been lethal on the attack, leading Serie A with eight goals already. As a squad, they’ve scored 16 times and conceded just seven.

Last time out, it looked as Stefano Pioli’s side was finally going to suffer a defeat, but Ibra saved them in the dying minutes to take away a point in a 2-2 draw with Hellas Verona.

Their only loss this season came in the Europa League, losing 3-0 to Celtic as they remain perfect in domestic action.

Napoli have been dominant against Milan in their last 11 encounters, winning six and drawing the other five. But, the Rossoneri are unbeaten in their last 14 competitive matches. With both sides in top form, this should be a very entertaining clash.

Villarreal will be seeking a massive victory against Spanish giants Real Madrid this Saturday at home.

After being sacked by Arsenal last season, Unai Emery has now taken over Villarreal and led them to a fine start in La Liga. They’ve gone unbeaten in their last five and are just two points off league leaders Real Sociedad.

Former Barca man Paco Alcacer has made a huge difference in the final third for this side, bagging five goals and tallying two assists. Gerard Moreno has formed a great partnership with Alcacer up top, also scoring four times.

Villarreal hasven’t lost in six domestic matches while keeping a clean sheet in three of them. But, Emery’s side has won just once in their last ten appearances at home against Los Blancos, including four draws.

The international break was a time to regroup for Madrid, who suffered an embarrassing 4-1 defeat to an average Valencia team on matchday nine.

It’s been an up and down year for Zinedine Zidane’s side to this point, but they still sit well above rivals Barca, currently holding fourth place.

Defensively they’ve been consistent, but Sergio Ramos will be missing this weekend after suffering a hamstring issue with Spain earlier this week. In addition, other centre-back Raphael Varane is also in doubt after picking up a knock for France.

With Madrid’s two main defenders potentially out, Villarreal’s lively attack will be looking to take full advantage of their opponent’s weaknesses at the back this weekend.

Based on their respective places in the Bundesliga table, this doesn’t necessarily seem like it would be a must-watch fixture. But it’s German football and anything is possible at any given moment, as we’ve seen many times before.

Frankfurt are currently in 11th place, but they’ve had the utmost success against Leipzig in recent memory. Adi Hutter’s side beat them on both occasions last year, but it’s important to note that either side has ever won more than two consecutive fixtures against each other.

Eintracht have won just once in five outings, but they are unbeaten in their last five games at Commerzbank Arena. Portuguese striker Andre Silva has really seemed to find a home with the Eagles, scoring five goals already this term.

Winger Filip Kostic is set to return to the starting XI for this clash after missing the last month before his brief stint as a substitute against Stuttgart and should give Hutter some more firepower going forward. Having tied their last two fixtures, Frankfurt will certainly be hungry for three points against one of Germany’s finest clubs.

Leipzig are keeping right up with Bayern Munich at the top of the table, just two points behind the current title-holders. Julien Nagelsmann’s men have lost just once and have conceded a league-low four goals.

Dayot Upamecano, who was rumoured to be leaving the club in the summer, has been a rock at the back for Leipzig. However, he did miss Leipzig’s last game against Freiburg and missed international duty because of a muscle issue, so he will be a game-time decision this weekend.

"Against us, @eintracht_eng have always played a different way and it's hard to predict their system. However, we have a basic idea and want to finally get our first win in Frankfurt!"

Even with Timo Werner leaving for Stamford Bridge in the last transfer window, they haven’t struggled for goals thanks to the production of Yussuf Poulsen and Emil Forsberg.

Man City loanee Angelino has also bagged a team-leading five goals across all competitions for Leipzig from the left-back position. The visitors have never won on the road against Frankfurt, a trend they will be looking to turn around.

This will certainly not be an easy three points for Leipzig. With a key player in Kostic returning to the squad and Frankfurt eager for a victory, this should be an entertaining fixture at Commerzbank Arena that could be full of goals.