St Mirren and Dundee United picked up victories in their re-arranged SPL matches during the week.

At St Mirren Park on Tuesday, Aberdeen made the long-trip from the Granite City down to Paisley and manager Mark McGhee left a disappointed man after the 1-0 defeat to Gus McPherson’s St Mirren. McGhee was brutally honest in defeat and said “We huffed and puffed, but it was poor, disappointing, no incision, no end product. Our expectations were high on the back of two good results.” 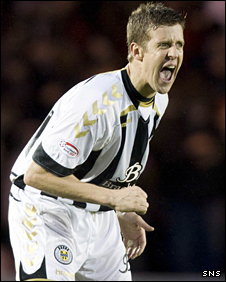 Innes in action for St Mirren

Chris Innes was the man who scored the only goal of the game after 73 minutes when Andy Dorman’s excellent corner was met by Innes’ half-volley which could not be kept out by Jamie Langfield. It could prove to be a huge goal for St Mirren come the end of the season, the win moves them into 7th on 20 points and are only 4 points away from Hearts in 5th place. Aberdeen, who missed Lee Miller for the match, created a few good chances but Paul Gallacher was equal to those efforts and kept a clean-sheet for the Buddies.

Dundee United left New Douglas Park relatively pleased after a 1-0 win over Hamilton Academical in what was a pretty even match that was separated by one goal. David Goodwillie scored his second goal in two games to give United the much needed victory after disappointing results since the departure of Craig Levein against Rangers and Aberdeen. Interim manager Peter Houston was quick to sing the praises of his central defenders Garry Kenneth and Andy Webster after they managed to nullify the threat of Hamilton’s attack after scoring 3 against Rangers in the Scottish Cup on Sunday. Webster, who is on loan from Rangers, is on fine form for United after a nightmare spell at Ibrox with injuries but his impressive displays could see him back at Ibrox next season with David Weir set to retire and the future of Madjid Bougherra still not confirmed.

It was stalemate until 75 minutes when the unlikely Garry Kenneth found himself in a wide-midfield position and he provided an accurate cutback for Goodwillie to slam the ball into the net past Tomas Cerny. United are now back in touching distance with Hibernian – only 2 points separate both clubs and only 6 points separate United and Celtic. It is a different story for Billy Reid’s Hamilton who are 4 points off bottom spot and with Rangers heading for New Douglas Park on Saturday and Jimmy Calderwood appointed new manager at Kilmarnock, they could be in for a tough end to the season.