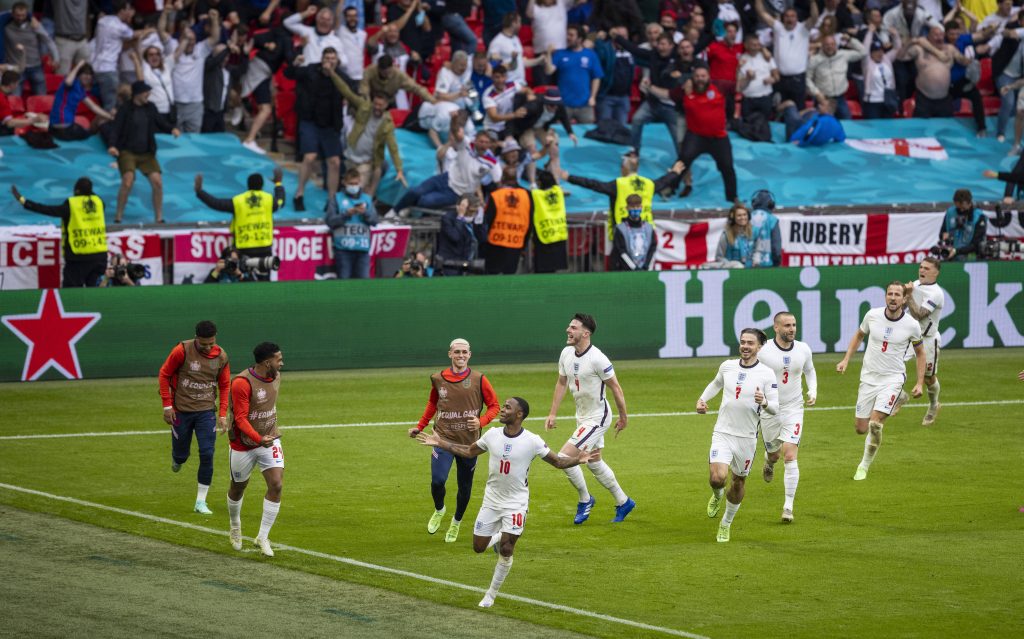 England reigned supreme over Germany at Wembley Stadium, laying past demons to rest and qualifying for the quarter-finals of Euro 2020 in the process.

Second half goals from Raheem Sterling and Harry Kane earned the Three Lions their win and a trip to Rome on Saturday to face Ukraine.

Although Gareth Southgate’s side went into the contest with home advantage and as narrow favourites, it was Germany who started on the front foot, building pressure on the England defence in the opening stages.

Leon Goretzka had a tame long-range effort along the floor taken comfortably by Three Lions’ goalkeeper Jordan Pickford, and Declan Rice gave away a free kick on the edge of the box, having been beaten for pace by the aforementioned Goretzka.

Rice picked up an early caution for his trouble but did react quickest to block Kai Havertz’s effort from the resulting set-piece.

With the early wave of German pressure dealt with, England began to cause some problems in attack.

Ever-impressive, Bukayo Saka did well to earn a free kick on the right wing after being felled by Antonio Rüdiger. Unfortunately for the hosts, that was cleared away without challenge.

Soon after, Raheem Sterling provided a tester for Manuel Neuer from distance, curling an effort at goal, but the German got across his goal well to tip the ball around his far post and behind for a corner.

Harry Maguire did meet the ball but had to generate all of his own power, so didn’t trouble Neuer.

In a tense affair, Matthias Ginter brought Luke Shaw down on the left wing and also took a booking for his troubles, with the referee seemingly not wanting to let the emotion of the occasion override the football being played.

From the resulting free-kick, England once again earned themselves a corner, and Maguire met the set-piece but headed over.

The Chelsea forward linked up well with club teammate Havertz, taking a through ball in his stride to get behind the Three Lions backline for the first time.

As seen countless times in his first season in the Premier League, Werner could not take his chance – Pickford ‘making himself big’ and denying the German with his legs.

Although the chance wasn’t taken, England knew that they had been let off the hook and solidified in midfield, with Kalvin Phillips making challenges to protect his defence on more than one occasion.

Sadly for Phillips, one of those saw him catch Toni Kroos just above the ankle, and he was cautioned to add to his midfield partner’s yellow earlier in the half.

It seemed like that would be the last action of note for the opening 45, but in added time, Southgate’s men should have got themselves ahead through captain Harry Kane.

Sterling drove towards the opposition’s box, drawing in countless defenders, and though he was crowded out eventually, the ball fell to Kane in space no more than five yards out.

Rather than take it first time on the volley with his weaker foot, the striker opted to try and take the ball down to tap home with his right.

His touch let him down, Mats Hummels recovered well to clear as the ball rolled across goal, and Kane’s wait for a goal at Euro 2020 continued as the half-time whistle sounded.

That felt like a huge chance, and if it hadn’t been for another good reaction stop by Pickford early on in the second half, Kane – and the rest of his teammates – could have been punished.

Again, like the opening 45 minutes, Germany started the better and built pressure around the England box.

When the ball fell to Havertz on the edge of the box, the attacker struck powerfully at goal on the half volley, and the ball flew at the England keeper in a matter of milliseconds.

Arguably straight at him, but Pickford still had to react and pick up the flight of the ball to tip it over the crossbar. If he hadn’t have got there, Germany would’ve been in front.

Similarly to Werner’s opportunity, that seemed to wake the Three Lions up, and they became sounder defensively, taking hold of a game that was like a game of chess.

Neither wanted to make a mistake, and neither really wanted to go for the victory too early in case of being punished going back the other way.

It turned into a game of very few chances, the most noteworthy one coming in the 63rd minute, and even that was only a ball whipped at Neuer by Sterling from the left side of the box, which could even have been intended as a cross, we will never know.

The first changes of the game came shortly after and, with around 20 minutes remaining, both Southgate and his opposite number – Joachim Löw – finally going for glory.

Germany replaced Werner with Serge Gnabry, once of Arsenal, while Saka made way for Jack Grealish.

If ever a game needed some creativity, the time was now, and Grealish added a new dimension to the Three Lions.

After Robin Gosens picked up a booking for a late challenge on Kieran Trippier, England were in the ascendancy with the Germans on the ropes, and with Sterling running directly at the German defence, the breakthrough came.

The Manchester City man involved both Kane and Grealish in some good build-up play around the edge of the German box, drawing defenders in again and leaving space in the area to shift the ball out on the left to Shaw.

A low ball across with pinpoint accuracy followed, and there was Sterling to grab the opening goal with a tap-in, leaving Neuer stranded with no chance.

Sterling’s 15th goal in his last 20 appearances for England and his third goal of the Euros, but definitely the most vital so far, at that point in the game still the only Three Lions goalscorer at the tournament.

Of course, having fallen behind and even with circa 35,000 England fans in full voice, Germany were never going to go out without some form of fight.

Straight from the restart, a long ball over the top to Joshua Kimmich had the England defence flustered.

Maguire took Kimmich out and got a booking for doing so, as well as conceding a free-kick in a dangerous position.

Thomas Müller stepped up this time for the Germans, and the vast majority of Wembley took a sigh of relief as his effort hit the wall and was cleared away.

Four minutes later, there would be an even bigger let-off for the hosts and one which probably cost Germany any chance of getting back into the game.

England were looking for a second, but hero Sterling almost turned villain giving the ball away close to the halfway line with no defensive cover to prevent a quick counter-attack.

Germany broke with Havertz slipping Müller in behind John Stones and Maguire – both with no chance of catching the forward.

Müller had time to pick his spot and just had to beat an onrushing Pickford, which he did, but also beat the post and saw his shot go wide.

Pickford deservedly furious with his outfield teammates – he knew what an opportunity they had provided to the visitors, all at Wembley and watching across the country did too.

England were fortunate but would soon end any nerves with another goal of their own to secure the win.

Kane has taken a lot of criticism throughout the group stages for not netting a goal and offering very little, but a good striker is never kept down for long, and he was there when it counted most.

Shaw took the ball in the middle of the pitch and drove forward, taking advantage of a now stretched German defence.

The Manchester United full-back shifted the ball to Grealish – again on the left of the box – who executed an inch-perfect ball across the box for Kane to nod home into an empty net.

Wembley erupted, and England were well on their way to the last eight at Euro 2020 with less than five minutes left.

Havertz pulled a volley wide, and another German attacker saw a bicycle kick go way wide of the mark, but Pickford’s net was never in danger from there on in.

It was 2-0 as the full-time whistle sounded, but this meant so much more to England than just the victory.

It was the first time that they’d beaten their old foes Germany in the knockouts of any tournament since the famous World Cup final of 1966.

They’d avenged the extra-time defeat at the 1970 World Cup. The penalty shootout heartaches of Italia 90 and Euro 96 and the ghost goal in South Africa 2010.

All that while keeping their own record clean, with the team still yet to concede a goal at Euro 2020.

The only other time that England have kept clean sheets in their opening four games at a major tournament was in that 1966 World Cup win. Over nine and a half hours without conceding a goal overall.

Next up, they’ll have to go up against either Sweden or Ukraine in the quarter-finals on Saturday night.

Southgate’s men do travel away from Wembley for the first time in this tournament, Rome the destination, but will be on cloud nine and have laid some past demons to bed too.