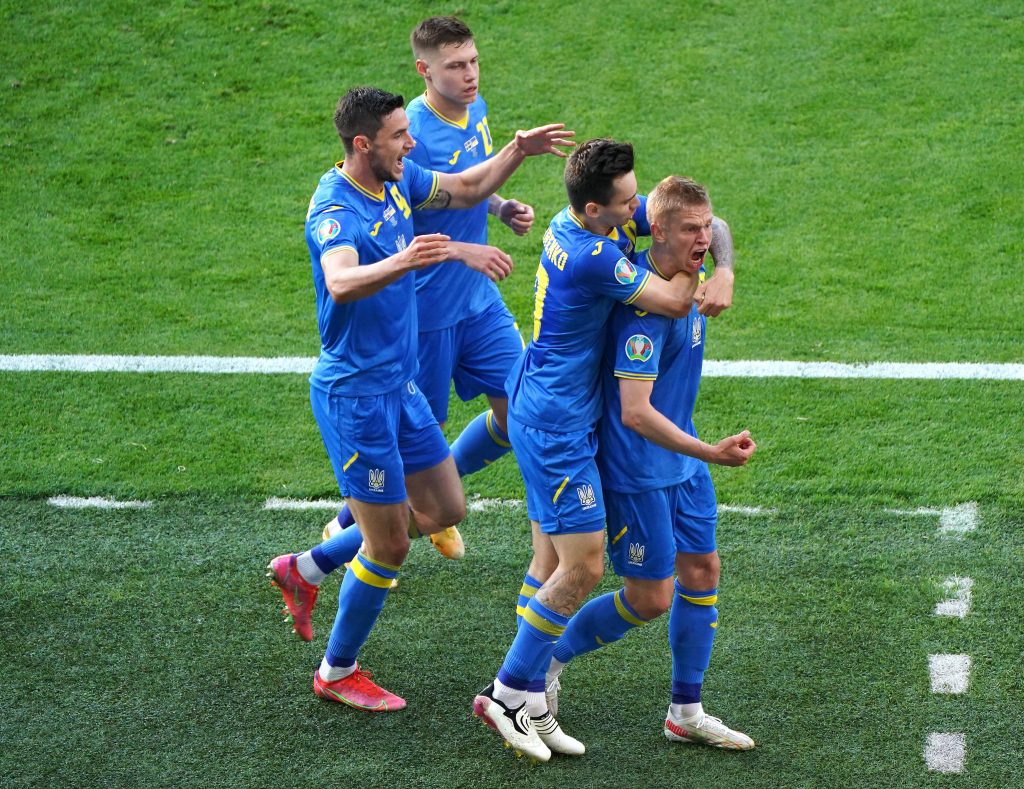 Ukraine reached the Euro 2020 quarter-finals in dramatic fashion, defeating Sweden 2-1 with a goal in the last minute of extra time.

Both sides came close to opening the scoring in the first 20 minutes. Emil Forsberg and Alexander Isak struck wide for Sweden, while Roman Yaremchuk had an effort saved for Ukraine.

Ukraine went in front after 27 minutes. Andriy Yarmolenko found Oleksandr Zinchenko with the outside of his left foot, and the Manchester City man struck a powerful effort into the far corner, with goalkeeper Robin Olsen getting a hand to it.

This lead lasted until just before half time, when Forsberg managed to hit his fourth of the tournament.

He picked up the ball from outside the box and saw his long-range shot deflect kindly off Illia Zabarnyi and into the top corner to bring his side level.

Both sides came within inches of taking the lead early in the second half. Ukraine almost got themselves ahead when Serdiy Sydorchuk cracked an effort off the post from Yarmolenko’s cutback.

And Sweden also hit the post just seconds later. This time, Isak made a driving run and laid the ball into the path of Forsberg, who placed his effort onto the foot of the upright.

Forsberg was denied by the woodwork again later on in the game. He skipped past two Ukrainian defenders and unleashed a curling shot with his right foot but was desperately unlucky to see it come back out off the crossbar.

With normal time coming to an end, Sweden had a great chance to nick a winner. Dejan Kulusevski got in behind, but took too long on the ball and was denied by a last-ditch tackle from Zabarnyi.

Neither side could get a second in the first 90, taking the game to extra time.

Things got more difficult for Sweden during the first half of extra time when they were reduced to ten men.

Marcus Danielson lunged for a clearance but followed through and caught Artem Besedin on the knee. After a VAR check, the red card was brandished.

It seemed as if the game was destined for penalties, but this wasn’t the case as Ukraine nicked a winner right at the death.

Zinchenko swung in a brilliant cross for substitute Artem Dovbyk, who buried his header into the bottom corner.

Ukraine held out for the victory, taking themselves through to the quarter-finals. They will face England in Rome.

Robin Olsen (6/10) – Could maybe have done better for the opener. Made up for it with a couple of good saves.

Victor Lindelof (6/10) – Didn’t get tight enough to Dovbyk for the winner. Solid otherwise.

Marcus Danielson (5/10) – Defended well when tested but was sent off for a horrendous tackle on Besedin.

Ludwig Augustinsson (6/10) – Got forward well into some good positions. Didn’t do enough to counter the threat of Yarmolenko down his side.

Sebastian Larsson (6/10) – Showed some of his quality but wasn’t able to create as much as he’s capable of.

Kristoffer Olsson (6/10) – A solid display in the middle of the park. Sacrificed after the red card to Danielson.

Albin Ekdal (6/10) – Worked his hardest in midfield and looked good on the ball at times.

Emil Forsberg (8/10) – Unlucky to be on the losing side. Fortunate with his goal but had his luck cancelled out when two of his efforts hit the woodwork.

Dejan Kulusevski (5/10) – Not at his bright best. Wasted a brilliant chance to win it towards the end.

Alexander Isak (5/10) – Made one driving run that almost led to an assist. Other than that, didn’t cause many problems.

Georgi Bushchan (6/10) – Couldn’t do much about the goal. Otherwise was dependable when called upon.

Oleksandr Karavaev (6/10) – Had a few moments going forward. Didn’t cope with Forsberg on his side.

Illia Zabarnyi (7/10) – Made one vital tackle right at the end of normal time to prevent Kulusevski.

Serhiy Kryvtsov (7/10) – Dealt with the pace and physical presence of Isak effectively.

Mykola Matvienko (7/10) – Reliable at the back. Didn’t let a whole lot past him.

Serhiy Sydorchuk (7/10) – Energetic and contributed at both ends. Unfortunate with a shot in the second half that hit the post.

Taras Stepanenko (6/10) – Battled in midfield and had some good touches, but sometimes couldn’t contain the threat of Forsberg.

Oleksandr Zinchenko (8/10) *MOTM* – Took his goal well and produced an inch-perfect cross for the winning goal.

Andriy Yarmolenko (7/10) – Caused several problems down the right and got himself a very good assist.

Roman Yaremchuk (6/10) – Linked up well at times. Didn’t have the impact that he would have hoped.

Mykola Shaparenko (7/10) – Had some bright moments and played his part in the opener. Substituted on the hour mark.