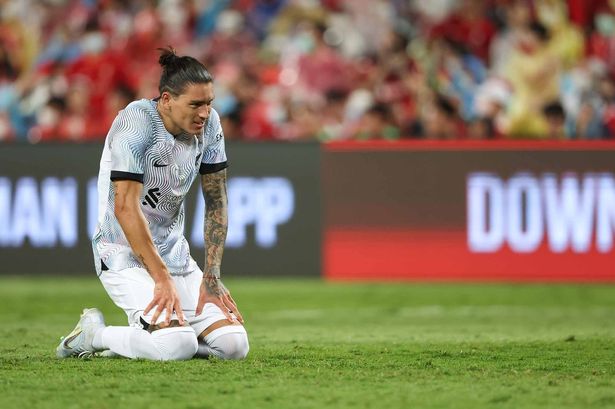 The Uruguayan, who recently made the switch from Benfica for a club-record £85million free, cut a frustrated figure as his side were dismantled by Manchester United.

In Erik Ten Hag’s first game in charge of the Red Devils, forgotten figures in Marcus Rashford and Anthony Martial looked rejuvenated as they carved through a helpless Liverpool defence.

In contrast, Jurgen Klopp’s new danger man came on with half an hour to play, and although pre-season is no real test of a player’s calibre, a highlight reel put together by one  smug United fan highlights a disappointing showing. See the reel below.

While Darwin Nunez’s sitter which he blazed over the bar had to be goal, Manchester United went on to win the match regardless with an empathic 4-0 scoreline – the first time they have managed to beat Liverpool over the last four meetings.

Liverpool manager Jurgen Klopp was quick to defend his latest acquisition. Speaking after the game, he said;

“He is a number nine and he can play on the wing as well. We will see where he will play. But what you could see is the boys were already searching for him.

“It was his third session and I think after the third sprint his lungs were nearly ready to explode.

“We nearly killed him with these balls but he offered the runs and the boys wanted to pass the ball, that is for sure one of his strengths. He was dangerous, all these kinds of things.

“So Darwin, we will see. I think his profile is a proper number nine so that’s helpful with speed and aggression and using his body, all these kinds of things.”

Liverpool’s pre-season continues with another Premier League clash in Singapore as they face Crystal Palace on Friday. Ready for that fixture, take a look at our comprehensive guide to some of the best football betting sites.