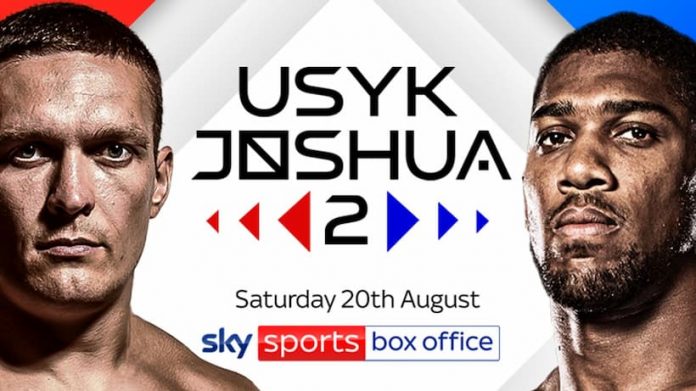 Boxing fans aren’t holding back from voicing their anger at the rising pay-per-view (PPV) price for Oleksandr Usyk vs Anthony Joshua on Sky Sports Box Office on Saturday August 20th.

The highly anticipated rematch between the two heavyweight kingpins for the WBO, IBF and WBA-Super world heavyweight titles is being broadcast live by Sky Sports on the PPV platform from Jeddah, Saudi Arabia.

After their first fight in September 2021 at the Tottenham Hotspur Stadium was priced at £24.95 on Sky Sports Box Office, fans are outraged at the increase in price for the rematch between Joshua and Usyk.

Despite Joshua signing a long term broadcasting deal with streaming giants DAZN, it seems Sky Sports have won the rights to showcase this magnanimous heavyweight rematch on their platform.

Joshua signed a stagger £100m deal with DAZN, but it is rumoured that Sky Sports won the bidding to show Usyk vs Joshua 2 on their channel. It has been reported by several sources that Sky Sports paid £25m for the rights to air ‘Rage On The Red Sea’ on their Box Office channel.

Sky have increased the price of their pay-per-view by £2, making this the highest PPV price for a fight in British boxing history. It is fair to say that fans aren’t exactly too pleased with the price increase…

Fan Reaction To the PPV Price for Usyk vs Joshua 2

Here is some twitter reaction from frustrate boxing fans at the increased cost of the PPV fight between Anthony Joshua and Oleksandr Usyk:

Will you be buying it?

@EddieHearn why are you charging £27 for Joshua Vs Usyk PPV? Times are tough! £27 is a joke! How do you justify it?