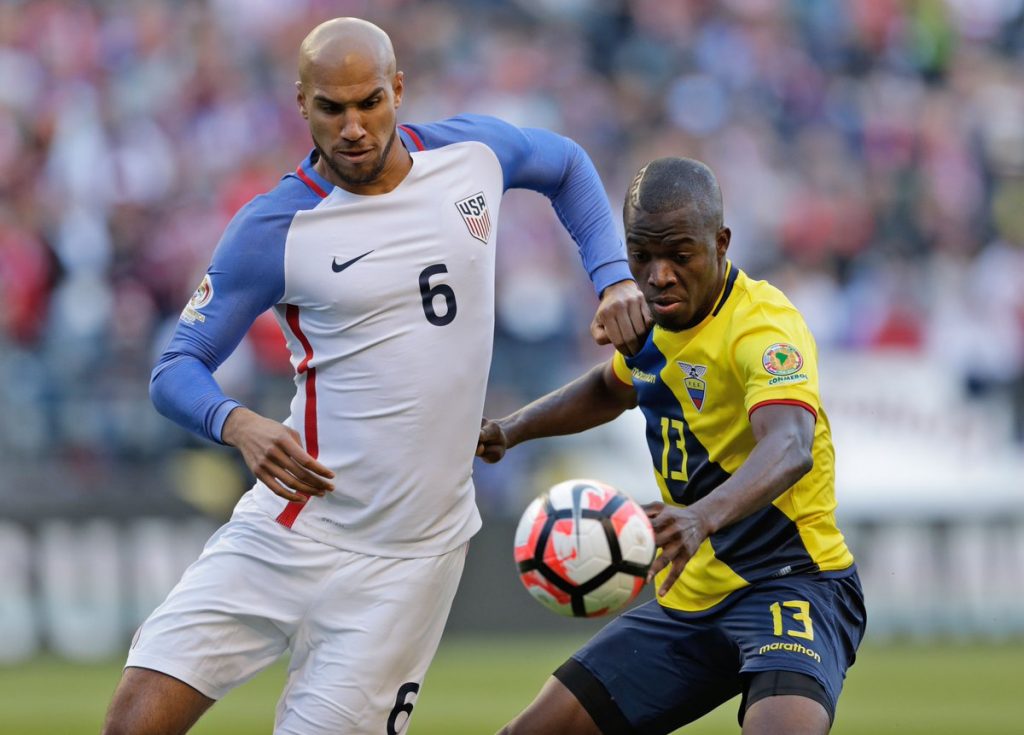 Clint Dempsey scored his 52nd goal for his country as USA move into the semi-finals of the Copa America Centenario on Thursday after a wild 2-1 victory over Ecuador at CenturyLink Field in Seattle where both sides finished with 10-men.

After a cagey opening 20 minutes, Jermaine Jones and Michael Bradley steadily imposed themselves in the middle of the park. Jurgen Klinsmann’s side took the lead in the 22nd minute through Dempsey, who scored his third goal of the tournament.

It was a beautifully worked goal that started when Dempsey picked up the ball in the midfield and released quickly to Bobby Wood, who passed to Jones on the right side. Jones found Dempsey with an excellent cross that the former Fulham star headed into the net.

Alejandro Bedoya almost doubled the US lead three minutes before the break when Dempsey played him in on goal, but all he could do was hit straight at the keeper.

Ecuador had a golden chance to equalise in the 45th minute when Michael Arroyo got the better of the US defence but shot right at Brad Guzan.

The complexion of the game changed significantly when both teams were handed red cards. Manchester United winger Antonio Valencia picked up his second yellow for a rash challenge on Bedoya, having picked a card for a sly kick on John Brooks in the first half. In the skirmish that followed aftermath saw Jones losing his composure and shoving Arroyo in the face, and was shown a straight red card.

The game opened up dramatically: Ecuador were piling up the pressure but the Americans looked to score on the counter. Dempsey picked up a long ball and cut it back for Los Angeles Galaxy forward Gyasi Zardes, who scored with an easiest of tap-ins in the 65th minute.

Ecuador pulled one back through Michael Arroyo’s thunderous strike with still 15 minutes left to play. Enner Valencia was presented with two golden opportunities to bury the game for good, but the West Ham striker failed to hit the target, heading wide on both occasions from close range.

The victory puts the US into the semifinals where they probably will face Lionel Messi’s Argentina. Jurgen Klinsmann will have to make several changes to his squad as some of his star players are now suspended. Jones is out for the rest of the tournament, while Wood and Bedoya will not play in the next match.