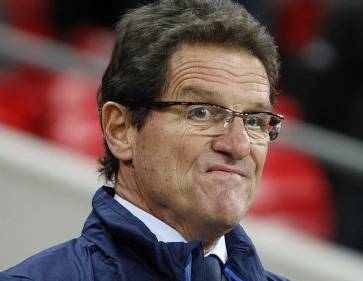 Both England and Montenegro saw their flawless winning starts to their respective Euro 2012 qualifying campaigns ended at Wembley last night, with a resolutely sterile stalemate ensuring that neither side deserved to leave with the spoils.

England dominated possession but, as we’ve seen so many times in the past, the percentages are entirely irrelevant if they are racked up by spending 30 minutes of each half playing endless strings of thoughtless six-yard passes across the edge of your own penalty area, occasionally yielding possession whilst attempting to hump 50-yard diagonal balls to your 5’9″ wingers – which appears to be plan A, B and C for Fabio Capello‘s side.

It was the eastern Europeans that came closest to breaking the deadlock with just eight minutes left to play, when left-back Milan Jovanovic (who had just survived a fairly blatant penalty appeal at the other end) saw his vicious dipping effort evade Joe Hart‘s despairing fingertips only to come rattling back off the crossbar.

Joe Hart: With Montenegro offering virtually nothing in the way of offensive threat, the Manchester City keeper’s role was reduced to that of a spectator for vast swathes of the game. There was little he could do about Jovanovic’s thundering pot-shot, so the Wembley woodwork must take just as much credit for the clean sheet. 6

Glen Johnson: Flattered to deceive as per usual. His bluster was mainly futile, but he highlighted just how overrated he has become with some truly woeful passing. Provided a decent cross for Crouch to head over early in the first-half, but mistimed and overhit nearly everything that followed. 5

Rio Ferdinand: A rash tackle on Milorad Pekovic got the returning captain’s night off to a inauspicious start and, truth be told, he was lucky to escape a booking. Looked unsurprisingly rusty, but remained calm and helped keep the Montenegrin offensive line at bay with relative ease. 6

Joleon Lescott: Put on a fine display of functional defending and looked at home alongside Ferdinand. However, the Manchester City defender will almost certainly lose his place when a certain Chelsea bully-boy returns to the fold. 6.5

Ashley Cole: Another solid if unspectacular night’s work from England’s (joint) most-capped left-back. Began to assist the attack upon realising that they were floundering, but his considerable efforts were ultimately in vain. 6.5

Adam Johnson: Inspirational and frustrating in equal measure. Provided the only genuine moments of excitement from an England perspective by actually running at players and getting in behind the Montenegro defense, but failed to make his incisive play count. Although he went close with a rasping free-kick, his corner delivery was a little off the mark. 7

Steven Gerrard: Hardly a vintage display from the Liverpool skipper, who attempted ‘Hollywood ball’ after ‘Hollywood ball’ but rarely saw anything come of them. His paucity of true invention around the edges of his opponent’s area was palpable, but he was one of England’s brightest sparks on the night – although that’s not really saying too much in his favour. 7

Gareth Barry: Entirely superfluous, and had no reason to be on the pitch. Why Capello didn’t replace him with the burgeoning talent that is Jack Wilshere is completely beyond me. 4

Ashley Young: Tried to match his opposite winger’s forceful running, but his insistence on ‘checking back’ hampered his progress. His spirit (and delivery) waned as the game progressed, and he was booked for a ridiculous dive in the second half. 5.5

Wayne Rooney: Just as Montenegro were robbed of their chief goal-threat due to Mirko Vucinic‘s untimely injury, so were England – although Rooney was somehow still deemed fit enough to waste a starting berth on. Looked mopey and disinterested for long periods, and fluffed a couple of decent chances that would have been second nature last season. His growing frustration resulted in a pink face and a yellow card for a petulant trip on Elsad Zverotic. 5

Peter Crouch: Made no impact whatsoever and wasted his one decent chance to score by heading Glen Johnson’s cross innocuously over the bar. 5

Kevin Davies (on for Crouch, 69 mins): At 33-years-old, Davies became England’s oldest debutant for over 60 years when he replaced Crouch with 20 minutes left on the clock. The Bolton target man then duly provided more in the way of hold-up and link play than the man he replaced had managed in the previous 70 minutes. 7

Shaun Wright-Phillips (on for Young, 74 mins): Carried on where Young left off by running at his full-back with no real purpose. Won a couple of late free-kicks, but never threatened to make a difference. 6

Right, those are my England player ratings. Do you agree/disagree? Let’s hear it…