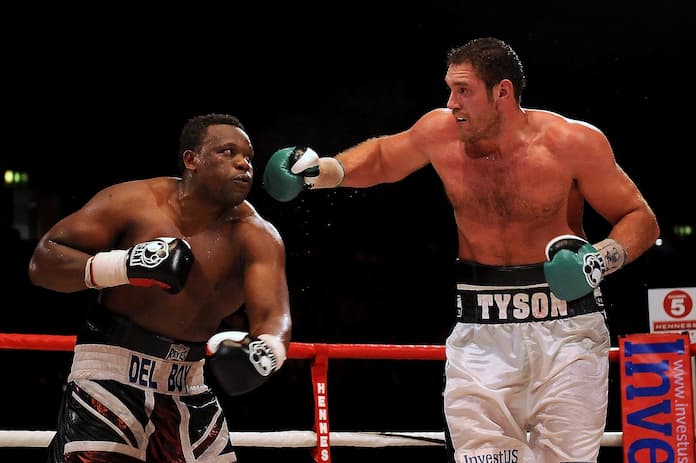 TYSON FURY has taken to social media to announce that he is coming out of retirement and wants to face fellow British heavyweight, Derek Chisora, in a trilogy fight. Fury and Chisora have fight twice before, with ‘The Gypsy King’ winning on both occasions.

Less than four months after Fury seemingly announced his retirement from boxing after knocking out Dillian Whyte in their highly anticipated super-fight at Wembley Stadium in April, ‘The Gypsy King’ has challenged ‘Del Boy’ to a trilogy bout.

Fury and Chisora have faced each other twice in the professional ring, with Fury coming out on top on both occasions.

Fury won the first fight back in 2011 by unanimous decision, before beating Chisora for the second time in November 2014. Fury won the second fight after Chisora’s corner pulled him out at the end of Round 10 of the contest.

Here is what Fury has had to say on the potential fight and his comeback from retirement:

.@isaaclowe6 will be my next trainer and train me for @DerekWarChisora 😎 pic.twitter.com/BRPDgcP8KJ

Fury has also announced that he will team up with long term friend and training partner, Isaac Lowe, who will be his trainer for the trilogy bout with ‘Del Boy’ if the fight does go ahead.

Lower fought in the co-main event on Fury’s undercard at Wembley back in April, losing his featherweight contest with Liverpool’s Nick Ball.

Fury vs Chisora 3 This Year?

It seems mad to thing that Fury and Chisora could be stepping through the ropes to face one another for the third time, 11 years after the pair first faced off in the ring.

If the fight does go ahead, it would be the first time in heavyweight boxing history that a fighter would have two different trilogies with two different opponents.

This would be the case for Fury, who has already fought American heavyweight Deontay ‘The Bronze Bomber’ Wilder three times. If Fury and Chisora were to somehow agree on a fight and face off for the third time, Fury would again be making history in this regard.

How To Claim Fury vs Chisora Free Bets

Haven’t claimed the Fury vs Chisora 3 betting offer yet? Don’t worry, take a look at the best betting sites and claim the best bookmaker free bets.