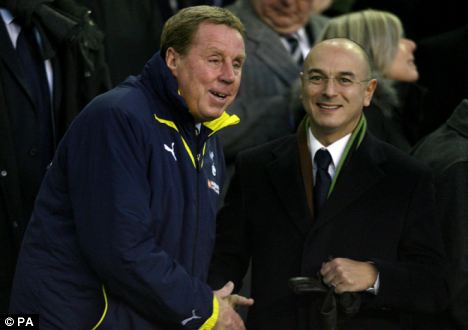 The transfer window closed with Tottenham Hotspur making only two significant deals, but perhaps the North London club has finally grown up.

The signings of Emmanuel Adebayor and Scott Parker, address issues within the Spurs line up, but left the fans with a deep sense of anti climax. Tottenham failed to sign a player who would prove to the supporters, that the club is determined to recapture the excitement of Tuesday and Wednesday night Champions League encounters.

Chairman Daniel Levy, we are led to believe had a busy deadline day organising deals, but it seems his time was spent sorting the out-goings more than the incoming.

Tottenham Hotspur shed the weight of Peter Crouch, Jermaine Jenas, Alan Hutton, Jamie O’hara and David Bentley. This coupled with the exits of Jonathon Woodgate and Robbie Keane will have done much to ease the finacial burden of a year without Champions League, but what of new players?

Striker Adebayor could prove to be a stellar signing for Spurs. The Togolese international comes with a big reputation as a dressing room divider, but there is no doubt that he has the knack of performing well for one year. As Levy astutely signed a non-committal loan deal, it is hoped that Adebayor can perform a “one season wonder” and give Spurs back the bite they have lacked since Jermaine Defoe smacked 5 goals past Wigan.

Central midfielder Parker offers spurs a combination of drive, shooting, passing and tackling. The former Hammer, also offers Sandro an experienced partner and releases some of the burden placed on his shoulders after a string of sparkling performances towards the end of last season.

The signing of Brad Friedel may also prove to be rather astute. The eight goals he has concede so far this season, has had more to do with the players in front of him, rather than the errors that Heurelho Gomes is prone to.

We should not forget the youngsters signed this window, Christian Cellabos and Yago Falque, both products of the famed Barca youth academy. The two youngsters possess great skill and ability and if they have more focus and professionalism than the mercurial Gio Dos Santos, Spurs may have acquired two good prospects for nothing.

Souleymane Coulibaly, a transfer from Siena’s youth team, has already shown his undoubted potential. He scored two goals in his preseason debut, before helping Spurs crush Inter Milan 6-1 at the NextGen Series at Leyton Orient on Wednesday. The ‘next drogba’ looks a seriously bright prospect.

Tottenham may have signed senior players who have all previously been within their grasp, but perhaps it is a sign that Spurs are finally learning from their mistakes.