It’s that time of year again, the period in the football calendar that we objective observers know affectionately as ‘silly season’.

The transfer window has re-opened like a veritable Pandora’s box, spewing forth some of the most spurious and entertaining football gossip we’ve seen in a long time, and I love it!

Here’s a round up of today’s juiciest transfer gossip…

Despite Wolfburg’s protestations to the contrary, Manchester City are said to be on the verge of tying up a £36 million deal for the German outfit’s highly-rated Bosnian target man Edin Dzeko.

It was reported that City failed to activate a €40 million buy-out clause in Dzeko’s contract by Monday’s midnight deadline, leading Wolfsburg general manager Dieter Hoeness to declare that the striker would be staying at the Bundesliga outfit for the foreseeable future. (Daily Mail)

Manchester City have put Inter Milan defender Maicon at the top of their summer wishlist, according to the agent of the Brazilian international. However, City will face stiff competition from Real Madrid if they want to prise the flying full-back away from the Nerazurri. (Sky Sports)

Yet another Manchester City rumour doing the rounds this morning is that City have made a €35 million offer for Barcelona striker Zlatan Ibrahimovic, but their offer falls some way short of Barca’s valuation of the Swede. (imscouting)

Villa themselves are said to be eyeing a £5 million move for Manchester City defender Nedum Onuoha, pipping both Everton and newly-promoted Newcastle to his signature. (Daily Mirror)

Arsenal are prepared to let 19-year-old midfielder Francis Coquelin join Lorient on a season-long loan next term if it will improve their chances of acquiring the Ligue 1 outfit’s French/Polish defender Laurent Koscielny. (Mail)

Manchester United are planning a £12 million swoop for Danish centre-back Simon Kjaer, who has enjoyed yet another impressive season at Palermo. (caughtoffside)

Fulham are in talks with Brazilian left-back Fabio Aurelio over a pay-as-you-play contract. The 30-year-old is a free agent after choosing not to renew his contract at Liverpool. (Mail)

Hull midfielder Jimmy Bullard is on the verge of completing a season-long loan move to Celtic. (Mirror)

Barcelona are looking at bolstering their options in the wingback positions and have targeted Rubin Kazan’s Cristian Ansaldi, Osasuna’s Cesar Azpilicueta and Sevilla’s Cala as the men they want to bring to the Camp Nou over the summer. (Football Press)

Speaking of Barcelona, the Catalan giants are planning to offer Dmytro Chygrynskiy to Arsenal on a twelve-month deal to hopefully lessen the Gunner’s asking price for Cesc Fabregas (Mirror)

The agent of Sevilla winger Jesus Navas has revealed that his client is now ready to move on to bigger and better things, acknowledging Real Madrid‘s interest in the process. (Goal)

Inter Milan’s forgotten man Ricardo Quaresma has rejected offers from Genoa, Fenerbache and Sporting Lisbon in favour of warming the bench at the Guiseppe Meazza again next season. (CalcioNews)

Four clubs are tracking Roma’s Brazilian midfielder Taddei, whose contract at the Gialiorossi expires on June 30th. Juventus, Sampdoria, Geno and Fiorentina have all expressed an interest in the skillful 30-year-old winger. (FootPress) 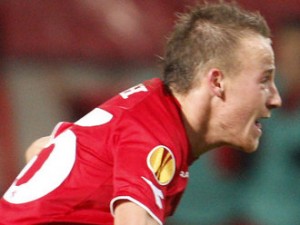