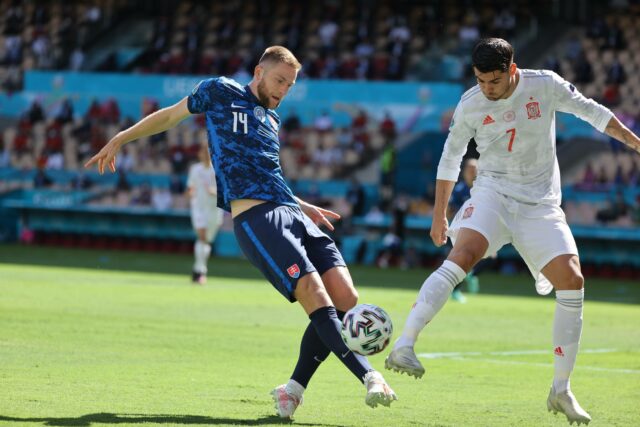 Tottenham Hotspur still retain an interest in signing Milan Skriniar from Inter Milan, according to The Athletic.

The original report deals with Toby Alderweireld, who has informed the club that he wants to leave at the end of the season.

The world-class Belgian defender wants to end his six-year stay at the north London club, with Royal Antwerp showing interest in him.

The report claims that Spurs will not stand in his way if they receive a good offer.

Spurs are looking to bolster their defence this summer, with director of football Fabio Paratici keen to sign at least two centre-backs.

Jules Kounde of Sevilla and Lyon’s Joachim Andersen are being targeted, while the north London club ‘retain an interest’ in Skriniar.

Spurs have also made a bid of €15 million (£12.9m) plus add-ons for Bologna’s Takehiro Tomiyasu.

Spurs were interested in signing Skriniar during Jose Mourinho’s first summer in charge, but despite making strong efforts, they couldn’t agree to a deal.

Inter are looking to offload some of their key players to balance the books. However, it won’t be easy to prise Skriniar away, with Gianluca Di Marzio reporting that Inter have slapped a £51.5m price tag on his shoulders.

The 26-year-old has two years remaining on his Inter contract. He played a key role for the club last season, helping the Nerazzurri win the Serie A for the first time in a decade.

The Slovak international is a world-class defender and would be a massive signing for the club. However, the chances are high that Spurs will look for options elsewhere.

Read: Tottenham star wants to leave the club this summer.