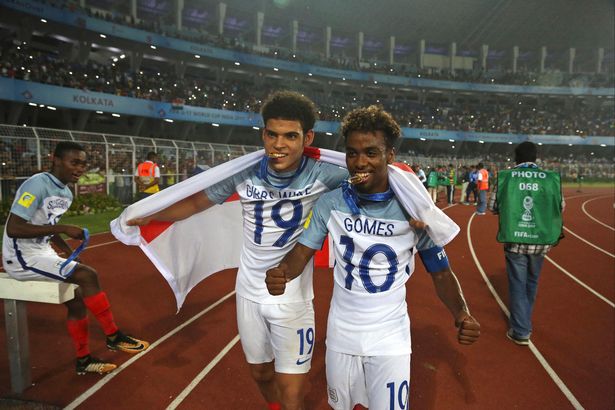 Premier League giants Liverpool, Arsenal and Tottenham are all interested in securing the services of the Wolves youngster Morgan Gibbs-White.

The 17-year-old was outstanding for England during the U17 World Cup in India and the Premier League trio are keen on adding him to their youth squad.

As per the reports, Liverpool are currently leading the chase for the highly talented teenager.

Wolves are not allowed to offer him fresh terms before he turns 18 and his suitors are keen to take full advantage of that. Liverpool are apparently prepared to pay £5 million for his services.

Gibbs-White’s contract expires at the end of next season and he might be tempted to make the step up now. He has already played for Wolves’ first team against Stoke City (League Cup) and in the Championship.

The 17-year-old is a versatile player who can play as a forward as well as an attacking midfielder. Most of his U17 teammates are at top clubs right now and the time has come for him to make the step up as well. It will be interesting to see whether Spurs make a move for him anytime soon.

Pochettino has done well to develop the young players at Spurs and he would be a great influence on Gibbs-White as well. The 17-year-old is very talented and the Argentine boss could help him fulfil his potential.