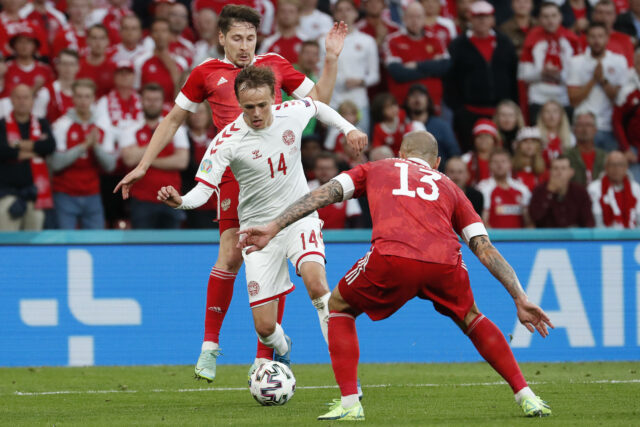 Tottenham Hotspur fans have taken to Twitter to express their reaction to Mikkel Damsgaard’s latest performance.

Damsgaard scored as Denmark won 4-1 against Russia in the European Championships on Monday.

It was an emotional victory for the Danes, who saw their teammate Christian Eriksen collapse on the same pitch in their tournament opener against Finland.

Denmark needed to win this game and hope Belgium would beat Finland to progress through to the knock-out stages.

The hosts produced a fantastic performance, with Damsgaard setting the stage alight with an exquisite long-range opener.

Yussuf Poulsen had put Denmark 2-0 up, while Chelsea’s Andreas Christensen added the third. The Danes confirmed their progression when Joakim Maehle made it 4-1.

Many Spurs are excited about the performance of Damsgaard and have urged the club to sign him this summer.

We were linked with that damsgaard guy 😢

get Damsgaard to The Lane now https://t.co/OWhG0Ti9Ti

The report claimed that Paulo Fonseca, who was close to joining Spurs before talks broke down, would have been keen on signing the player as he previously worked with him at Roma.

Damsgaard is one of the bankable assets for Sampdoria. He has suitors in Europe, especially Tottenham.

Sampdoria chief Massimo Ferrero is asking for more than €20 million for the exciting winger.

Spurs are yet to appoint their new manager at the club.

The London club have plenty of talented attacking midfielders and wingers, but Damsgaard would be a valuable long-term addition, especially in place of Gareth Bale.