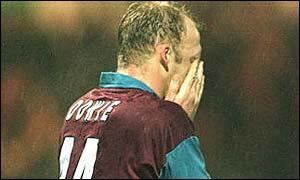 Scoring an own goal is soul-destroying, confidence-shattering and altogether demoralising. If you deflect a shot into your own net, convert a cross past your own goalkeeper or get the last touch before your team concedes it is frustrating and annoying, but these ten are just down right embarrassing. And quite funny.

The Scorpion kick is a showcase of skill that takes mastery and time to perfect, and is rarely used in the modern game. Nigerian defender Festus Baise decided to use it in the Hong Kong First Division, with disastrous consequences.

Seemingly under no pressure whatsoever, Greece’s Avraam Papadopoulos decides that he needs to put a Luxembourg cross out for a corner, but instead neatly slots the centre home past his own goalkeeper.

Unexplainable, embarrassing and downright painful, Chris Brass almost broke his own nose with this attempted overhead clearance for Bury against Darlington back in 2006.

After signing for Arsenal from Charlton in the summer of 2011, Carl Jenkinson was hailed as a great prospect discovered by Arsene Wenger. Gunners fans weren’t entirely convinced after this effort in a friendly against Koln.

Gary Neville was accredited for this monstrosity, with Paul Robinson falling victim to a questionable eastern European pitch as England were beaten 2-0 by Croatia.

Ian Dowie had an eye for goal and was a talisman for Northern Ireland during his international playing days. West Ham fans witnessed him hit the back of the net 13 times over two spells with The Hammers, with this effort against Stockport potentially being the most clinical.

The back heel flick is a trait of the showboater, the playmaker, the trequartista. However Fratton Park saw Australian defender Tony Popovic try the subtle art for Crystal Palace with an em, interesting, conclusion.

The secret to a successful back-pass is keeping the ball on the deck, playing it to the goalkeeper’s favourite side and not hitting it too hard. Ismail Aissati tried the opposite for Ajax against Benfica…..

A fine individual effort, this Jamie Pollock special relegated Manchester City to the third tier of English football for the first time in history, whilst simultaneously saving QPR from the drop.

As the ball came across the Portugesa box, onlookers screamed, “You have time Paulo”, “take a touch”, “leave it for the keeper” and many other rational pieces of advice. Unfortunately the advice was not heeded.