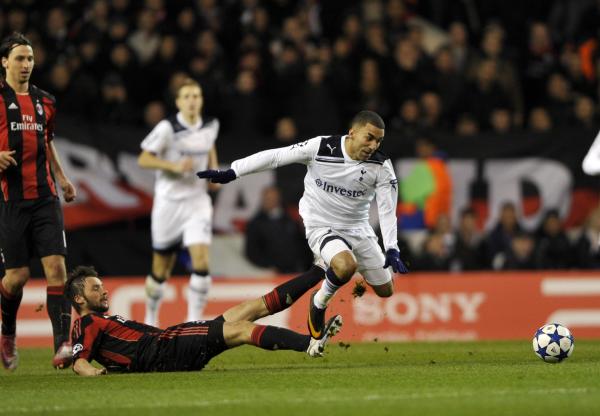 Fun fact: Tracking was extremely important to the pivotal champions league knockout round second leg between Tottenham and AC Milan. The Rossoneri went into the game very much the underdogs having been deservedly beaten at the San Siro, which is fair enough considering the firepower Tottenham could have potentially deployed from the outset – Van Der Vaart, Crouch, Lennon, Bale, Modric – enough to make Inter Milan briefly shudder, in any case.

But were AC Milan overwhelmed and obliterated? Not at all.

Had Gallas been a split second slower to hack the ball clear following Gomes’ first half error and Robinho’s spectacularly lucky mis-kick, Milan are suddenly playing to score the vital, game winning away goal. In a game they were on top, that is a huge situation to be in. Although ultimately thwarted, Milan did demonstrate how to effectively stifle  Tottenham by making just a few modifications from the team that lost 1-0 in the first leg – tweaks to the Milan team that allowed them to not only nullify Lennon, my pre-game favorite to cause Milan damage, but also use him and Pienaar against Redknapp’s side.

Most people who see this article will know what tracking is, so for those few who don’t here’s a quick description: When the wingers/ wide players in a side move back into defensive positions as an opposing fullback attacks, preventing their own fullback from being ganged up on by the winger and wing back.

Of course this doesn’t just apply for wingers – midfielders, wingers and strikers can all track back weather to simply drop into good counter attacking space for your team to break away, or to better cover any gaps between midfield and defence to restrict the role opposings players like Ozil or Iniesta play in the space between midfield and defence. But enough about them, this article is about wingers and tracking back and where AC Milan and Tottenham differed in their approach.

Well not literally, although Andy Townsend’s description was useful in demonstrating that Milan didn’t follow usual convention in tracking back the wingers with Robinho and Pato. In fact in general, Milan didn’t have winger with which to do this, in theory – Pato played alongside Ibrahimovich in attack and Robinho dropped off behind the two. Thus the narrow diamond for AC Milan (Seedorf the deep play maker, Boateng and Flamini the central midfielders and Robinho the attacking midfield) was slightly modified from the first leg in that instead of having Seedorf to link to the attack (a role in which he played poorly) the much more mobile and tricky Robinho played there instead.

As said before, neither Robinho or Pato really tracked back, which usually would have left Jankulovski at least open to being exposed to Lennon’s pace. But alas, the Milan manager Allegri had made modifications so this was not so.

Kevin Price Boateng in particular was key. With Pienaar on the other flank cutting inside Lennon was Tottenham’s key wide threat – but with Boateng moving to help Jankulovski Lennon’s potential for damage was curtailed. Corluka, who is a more conservative fullback then the two of Milan, was perfectly happy to give Lennon the ball and let him take on the defence without offering overlapping help, and so with no-one to draw a defender away Lennon couldn’t find the room to operate.

So we see that a more unorthodox system of tracking back was implemented by Milan – using the already deeper central midfielders to help the wing backs instead of players further up the pitch.

Of course, this isn’t what Andy Townsend was referring to when he talked about cheating – he was talking about Robinho and Pato. It wasn’t simply one element of the tracking back idea that allowed Milan to take control of the game – it was several tactical ploys working in tandem.

Pato and Robinho, those scoundrels.

In fact Tottenham’s conservative wingbacks were key in Tottenham losing control of the game.

Corluka for example would only move up the pitch to make passing to Lennon easier. Meanwhile, behind him Pato would take up position on the channel, attacking the left flank of the penalty area where Corluka leaves space by getting forward to supply Lennon, the small winger mostly uneffective because of the tracking back role Boateng played.

Thus when Corluka was getting forward he was not only not greatly benefiting Tottenham’s attack  but he was also giving Pato behind him plenty of space into which to attack. Robinho, on the other side also tried to find these spaces, although with the less direct winger Pienaar on that flank, Robinho was more regularly in the space behind Ibrahimovich then ploughing the right channel.

So then, Milan found themselves opportunities to attack the box through the right of Tottenham’s defence. Pato rounded Gomes only to see his cross spurned by a combination of Robinho and Gallas, and before that he drove a cross behind Gallas and Dawson, only for there to be no-one attacking the six yard box. Pato was causing notable problems down that side, certainly more then Lennon, so Corluka, already conservative, dropped deeper to cover the space Pato was attempting to use.

But once again, this only sought to benefit AC Milan. From this change in tack from Corluka they could press on to really control the game – and remove Lennon as a threat almost entirely.

Tracking back is conceding ground

It was when Corluka dropped deep to monitor and try and control Pato that AC Milan could really push forward, and this was achieved through the work of Marek Jankulovski – and to a certain extent, Lennon and Tottenham’s unwillingness to gamble. When Jankulovski pressed forward, Lennon followed – preventing Corluka from being overwhelmed on that flank but at the same time removing himself as an attacking threat.

To be fair to Tottenham, Pato and Jankulovski ganging up on Corluka would have been a very, very dangerous situation, and arguably Lennon had no choice about it. Yes, there is an argument that like Milan’s wide strikers he could have simply not tracked back and instead waited in a attacking position to strike at a undermanned AC Milan line.

As it was, Lennon could do nothing – Milan had far too much of the ball, and were attacking Corluka’s side of the defence too often for Lennon to neglect his defensive duties. So Lennon’s pace, in the last game pivotal to Tottenham’s win was removed as a factor. Arguably, Pienaar the other side had more success in cutting inside, but even he was peripheral.

So why could AC Milan risk keeping their wide players forward where Tottenham’s could not afford that privilege?

Robinho regularly dropped into the space in front of the defence, forcing Sandro to deal with him. Modric, on the left of Totenham’s central pairing was marked against Flamini, and with Pienaar being occupied by Abate, Milans other wingback Van Der Vaart had a problem. He either dropped deeper to occupy Seedorf, leaving Crouch isolated far from goal against two wiley defenders or stayed with Crouch, and left Seedorf free. Either way Boateng is still free to play the ball.

The end result was that Van Der Vaart generally didn’t shackle Seedorf at all, leaving Milan to dominate the ball and bring about the situation in which all Lennon could do was defend against a Milan side very much on top. Through their extra players in the centre,  they allowed the likes of Jankulovski to get forward, dragging Lennon back, removing a passing option for Tottenham and leaving them even more struggling against AC Milan’s tide.

So how could Tottenham have taken more control?

Easy. Milan’s formation at White Hart Lane, with Robinho able to move in behind Assou-Ekotto as well as Pato on the other side was a formation made to beat Tottenham at home. The reason being Tottenham’s 4-4-1-1 formation. It’s a formation designed to make the best of Tottenham’s power on the wings and preference to get forward – but with AC Milan taking Lennon and Pienaar out of the game Tottenham’s attacking game fell apart. Lennon couldn’t supply Crouch, Crouch barely even had scraps to feed off or give to Van Der Vaart, and Modric was simply overwhelmed in midfield.

Tottenham contributed little of attacking value to the game purely because of how Milan set out to stop them, but through a few small modifications to the style, they could have taken more of a foothold. Bale is one that could have arguably started instead of Pienaar – forcing Flamini to track him wider to the flank. Another change could have been Van Der Vaart for Palacios.

The combined result could have been that with the two wide attacking threats, Tottenham would either have much greater control over the game in the middle because of the attention being paid to their wingers, or it would give Bale and Lennon more room to attack Milan’s wing backs as a result of Flamini and Boateng playing more narrow roles, or a mix of both. Certainly, it would have given Tottenham more opportunity to attack, and score the goals that could have ended Milan, isolating Seedorf and Boateng far more, and Modric much less.

As it was rather then blow away their opponents like they have for alot of their home games, Tottenham found their tactics being used against them. They may have to consider different tactics in home games in the champions league run in, if they are to make it further. Certainly, Milan’s performance at White Hart Lane suggests that Tottenham are not going to prove so invincible on their own pitch if they continue trying to go gung ho.