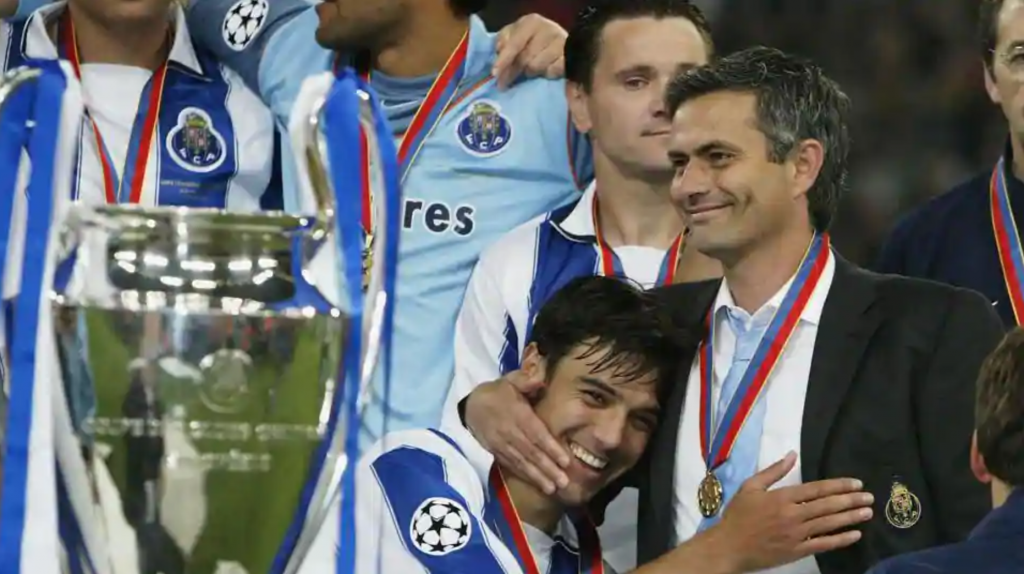 Whenever there is a conversation about the greatest teams in Europe, we often name Real Madrid, Barcelona, Liverpool, AC Milan and Bayern Munich among the elite. In fact recently, 3 of the above have won Champions League titles and have been a treat to watch for these past 5 years.

However, in all of the conversations, discussions and debates, the name of FC Porto is nowhere to be found. We know Jose Mourinho the “special one” but, what exactly what made him so special?

After his brief but impressive stints at Benfica and Uniao de Leiria, Mourinho returned to Porto in 2002 as manager. It had an immediate effect on the side as they saw a stellar season unfold.

The 2002-2003 season was an important step towards the upcoming European glories. The Porto side was a mix of young and experienced professionals and boasted the likes of Deco, Carvalho, Helder Postiga and Costinha all of whom had an incredible league season, winning 27 matches and losing just 2 over the 34 matches thereby, ultimately getting their hands on the Primeira Liga over Benfica by 11 points. They also won the Taca de Portugal by defeating Jose’s previous team UD Leiria (1-0) in the final

The Uefa Cup run, on the other hand, involved some surprising results such as the 6-2(aggregate) rout over Polonia Warsaw, two tough visits to RC Lens and Rapid Vienna (Wien). Then followed a massive 8-3 (aggregate) victory over the Turkish side Denizlispor after which they managed to overcome a tricky tie versus the Greek side Panathinaikos (Ludogrets) (2-1 agg).

In the Semi-Final, they played Lazio and completely outplayed them to win 4-1 on aggregate and proceeded to play Celtic in the Final.

The Final was an end to end encounter and involved 5 goals. Porto had taken a 2-1 lead after Alenichev scored in the 54th minute and 140 seconds later, Larsson scored again to equalize the game at 2-2 and took it to extra time. Deco’s brilliant run saw him playing in Derlei to score in extra time to win Porto their first Uefa Cup (now, Europa League) ever!

The next season, Mourinho brought in some technical players and worked on making the Porto defence better than it already had been. The likes of the South African Benny McCarthy, Maniche, Costinha and Deco would prove to play a very important role in that season. The present Wolves and Porto mangers Nuno and Conceição were also a crucial part of that team.

The season started with a 1-0 victory over UD Lieria in the Portuguese Super Cup in August. The league season that followed for the Porto side was one of the best seen throughout Europe. They lost only 2 matches, conceded only 19 goals throughout the season while managing to ably compete in the Uefa Champions League. They won the League by successfully thwarting attempts of closest rivals Benfica by 8 points. Benny McCarthy was their leading scorer with a stellar 20 goals in the season.

The main source of confidence that they took to the R-16 was a draw at the Bernebeu on the last matchday of the group stage. This gave them the impetus to challenge Manchester United (who they drew in the R-16).

Porto played a fantastic 1st Leg at the Dragaõ and won 2-1. The concession of an away goal to United meant that a 1-0 win for them at home at Old Trafford would be enough to go through to the next round.

The exact thing happened in the second leg and United were leading 1-0. But, Costinha grabbed an injury-time equaliser to send the Porto fans and José Mourinho into raptures with the latter making that iconic gallop down the touchline at Old Trafford. Porto were going to the Quarterfinals!

The second leg saw a Maniche brace to seal the tie in the start of the second half itself. They were through to the Semi-Final to play Deportivo.

A draw at the Dragaõ in the first leg of the Semi-Final meant that José’s side had to score in the second leg versus a dogged Deportivo side who themselves had a stellar record at Home.

The second leg had turned out to be more of the same till Porto got a penalty in the second half. Derlei Silva took it upon himself and converted the penalty to seal a dream place in the Final.

The Final was held at the iconic Veltins Arena at Gelsenkirchen, Germany. The Porto side was met by an able match in the current French National team coach Didier Deschamps led Monaco who also had a sensational run (eliminating the likes of Dortmund and Real Madrid out of the competition), leading to the Final.

The Final was played at a high tempo with Monaco just edging the possession stats as well as the attempts. José Mourinho, clearly had studied Monaco’s style of play and thus, set his Porto side for counter-attacks. This paid dividends as Porto hit the French team a stellar counter-attack which led to Carlos Alberto opening the scoring at the 39th minute mark.

The second half was more of the sane and ultimately the fatigued Monaco side were hit for multiple counters between the 70-80 minute intervals leading to two goals by Deco and Alenichev thereby, sealing the UEFA Champions League title for Porto for the first time since 1987.

The fairytale was complete. Porto overcame astronomical odds to win the title and much of it was credit to a young charismatic manager in the form of José Mourinho.

The “Special One” indeed!