Bert Van Marwijk‘s often utilitarian (but, nevertheless, unbeaten) Netherlands side will take on Vicente Del Bosque‘s dominant (though repeatedly over-indulgent) Spanish outfit in Sunday’s showpiece finale, with both countries bidding to be crowned champions of the 2010 FIFA World Cup.

What follows is a game-by-game look at how the Clockwork Oranje made it through to the very last round of the South African World Cup, thus putting themselves within 90 (or possibly 120) minutes of soothing a nation’s ire at never having fulfilled on their latent potential – after 40 years of Dutch flattery and deception on the grandest stage world football has to offer.

The Netherlands were drawn in Group E, along with Denmark, Japan and African hopefuls Cameroon and, on paper, the Dutch’s chances of progression to the latter stages looked near-enough nailed on.

Although there didn’t seem to be any obvious ‘givens’, it was widely expected that Van Marwijk’s side’s intrinsic class and attacking fortitude would be more than a match for the three opponents that stood in their way of reaching the last 16 – and this turned out to be the case in a round-about kind of way.

The Netherlands got their World Cup campaign underway at the very stadium in which the are fated to end it – Soccer City in Joburg.

With the in-form Arjen Robben sidelined due to a pre-tournament hamstring strain, the Dutch looked short of inspiration and had to rely on a slice of good fortune (a pattern that prevailed throughout) to get the ball rolling.

With the game at a stalemate, an own goal from Daniel Agger (through no fault of his own) visibly stirred the Dutch and, after a period of sustained (though not exactly purposeful) pressure, Dirk Kuyt pounced to roll home in the 85th minute to ensure that they got their tournament off to a winning start. 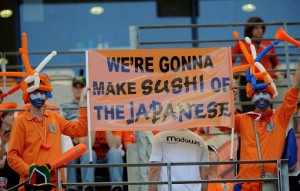 Van Marwijk chose to stick with the starting XI that eventually managed to ease past Denmark in the opening game, and the same result was duly forthcoming.

The game was cagey, with Japan well-drilled defensively and the Netherlands again struggling to spark their creative fuses.

The Dutch had to rely on a sporadic moment of impetus from midfield maestro Wesley Sneijder to provide the difference between the two teams, as the Inter Milan man lashed a vicious drive past Eiji Kawashima to nudge them in front.

The Netherlands again took the three points, but were still to put in the kind of world-beating performance you’d expect from a side with genuine ambitions of lifting the cup.

Denmark’s victory over Cameroon in their previous game meant that the Netherlands had already qualified for the last 16 before this game had even kicked off.

By contrast, Cameroon were already eliminated and, as a result, the sting was somewhat taken out of the match by the circumstances.

Robin Van Persie opened the scoring in the 36th minute after slotting home from an acute angle following some slick interplay with Rafael Van der Vaart on the edge of the area.

The ironically monikered Indomitable Lions then equalised from the penalty spot with 25 minutes left to play (Samuel Eto’o whipping the ball past Maarten Stekelenburg from twelve yards) but that left more than enough time for the newly-introduced Arjen Robben to demonstrate his importance to the Dutch attack.

After firing a wonderful shot goal-wards, the Bayern Munich winger unluckily saw his effort come back off the post, and Klaas-Jan Huntelaar was on hand to stab the rebound home thus rubber-stamping a three-for-three group stage campaign for the Dutch – although many remained unconvinced of their credentials.

The Slovakians came into the second round on a high after their 3-2 final group stage victory over reigning world champions Italy, but their buoyant mood was soon punctured by their superior opposition.

With the fit-again Arjen Robben restored to the starting line-up, the Netherlands were a different side to that which had labored through their first three games – and it was the injury-prone winger that broke the deadlock in the 18th minute.

After tearing on to a long-ball, Robben jinked inside from the right flank, breezed past two defenders and fired a measured shot past Jan Mucha from the edge of the area.

Wesley Sneijder then notched his second of the tournament to further stretch his country’s lead when, after some diligent work from Dirk Kuyt, the midfielder maestro was left with the simple task of passing the ball into a semi-vacated net.

The Slovak’s did pull a goal back at the death through a Robert Vittek penalty, but it was a case of too-little-too late for Vladimir Weiss‘ side – the final whistle sounding as Vittek retrieved the ball from the back of the net. 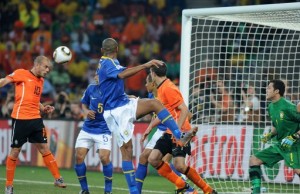 A quarter-final tie against Brazil presented the stiffest test that the Dutch had faced during the World Cup so far.

After finding themselves 1-0 down at the break thanks to a 10th minute goal from Robinho, it looked as though the Selecao would prove to be a ride-of-the-luck too far for Van Marwijk’s side.

The Dutch looked ‘as good as out’ up until the 53rd minute, when a mistake from Julio Cesar gifted them an equaliser. The Brazilian ‘keeper failed to make convincing contact with Wesley Sneijder‘s cross and had to watch on as the ball deflected off Felipe Melo‘s head and into the far corner – although the goal was later dubiously accredited to Sneijder.

With the Netherlands suddenly back on level terms, the tide of the game swung in their favour and they capitalised from the dramatic sea change when Sneijder popped up to nod in a collector’s-item headed goal just 15 minutes later.

Dunga’s side then started to self-destruct, an implosion that was exacerbated by the dismissal of Melo just five short minutes after Sneijder’s second goal when the Juventus midfielder saw red for a petulant stamp on Arjen Robben.

Finding themselves a goal up and a man up, the Dutch rode out the rest of the game to book themselves a place in the semi-finals.

Due to the discrepancies of a certain Uruguayan forward in the previous round, the Netherlands had the entire continent of Africa behind them going into their semi-final clash with Oscar Tabarez‘s ‘eternal underdog’ outfit.

Giovanni Van Bronckhorst‘s 18th minute wonder goal got the Dutch off to the perfect start – the veteran captain powering a dipping effort beyond the despairing dive of Fernando Muslera and into the far top corner.

Uruguay, undeterred by Van Bronkhorst’s opener, continued to sit deep and soak up pressure – striking on the counter-attack when the occasion arose, and arise it did.

With just five minutes of the first half remaining, Diego Forlan found himself in space around 25-yards out and released a wickedly swerving drive down the middle of the Dutch goal which foxed Maarten Stekelenburg and nestled sweetly in the back of the net.

La Celeste came out of the blocks swiftly in the second-half, maintaining the momentum that they had enjoyed during the latter stages of the first period, but then came the Dutch hammer blow that all but put paid to their World Cup dreams.

Two goals in three minutes from Wesley Sneijder (another fortuitous, heavily deflected strike) and Arjen Robben (an expertly dispatched header) all but secured the Oranje‘s first appearance in a World Cup final in 32 years – with a 92nd minute goal from Maxi Periera proving scant consolation for Tabarez’s side.

As a result of thier graft and resilience (highlighted by moments of pure footballing magic), the Dutch will now meet Spain in the 2010 FIFA World Cup Final.