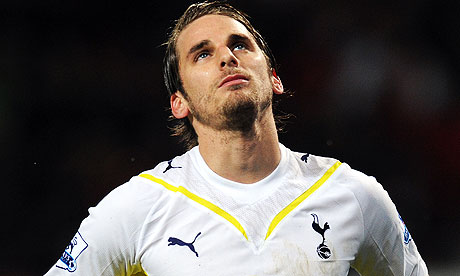 Former footballer David Bentley has moved to Russian club FC Rostov on loan. He was 28.

Some have mourned a wasted talent, others have been splashing each other playfully in the fountain of schadenfreude, where football fans congregate to mock the unfortunate. Bentley’s career has finally derailed completely, having teetered on the brink throughout his disastrous spell with Tottenham.

This is not to suggest that the Russian Premier League is merely some decrepit backwater. Zenit’s £64m joint purchase of Hulk and Alex Witsel speak of a league that is plainly upwardly mobile, even if it is thanks to petro-chemical lucre. But is this really where anyone had expected Bentley to be when Spurs signed him for £15m in 2008?

There was a time when it was simply assumed that David Bentley would be destined for great things. When Steve McLaren bought his workshopped teeth and publicity-friendly dossier to the vacant England post, he vowed to usher in a new era of youth, the type of thrusting manifesto so often suggested but seldom implemented.

As such, David Beckham was jettisoned to make space for fresh talent. A nervous tabloid press wrung its hands nervously as it looked for an alternative superstar entity, and one man looked sure to be the natural heir.

Bentley had been busy winning rave reviews for Blackburn Rovers, and had much in common with Beckham, even down to the matching initials, which ‘Bents’ would unwisely have stitched into his boots in a fate-tempting effort to ape his idol.

The similarities didn’t stop there: the cheekbones, the hipster haircuts, the Cockney heritage, the lack of pace, the right hand-side of midfield. McLaren would add further weight to these claims when he gave Bentley his full England debut. Perhaps seeking vindication of his scrapping of Beckham he would say:

“I can see that [comparison]. His right foot is pretty similar to David’s. He’s got a great touch, great feel on the ball, and he can deliver that pass.”

He would go on to win seven caps for his country. 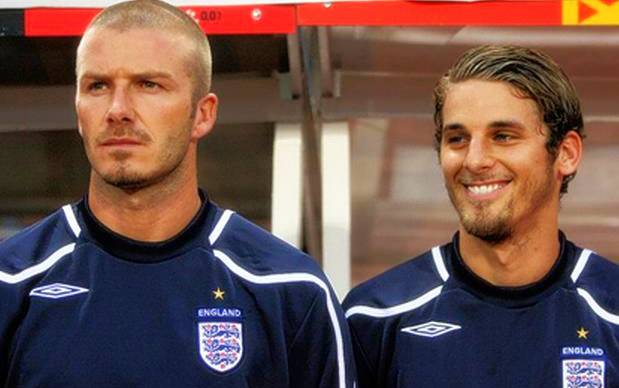 The TV channel ESPN Classic shows repeats of ‘classic’ England games, which are preceded by a brief video montage of England stars knocking the ball around in their England kit, being all English for the England team.

Amongst shots of the likes of mainstays such as John Terry, Ashley Cole and Frank Lampard was our man Bentley, no doubt selected as the stand-out young prospect that would surely go on to greater things. Today, his presence in this clip is a mere curio, a stark reminder of a time when people operating video cameras genuinely had cause to believe that footage of Bentley in an England kit wouldn’t prove to be a colossal waste of time and resources.

His ascension to super-stardom was made official when he was anointed as a columnist for The Sun, which usually reserves its pages for such renowned men of letters as Terry Venables and Ian Wright. That Bentley was proffered such a mouthpiece seemed like a contrived effort to raise his profile to anywhere as close to Beckham’s as possible, the better to augment his celebrity.

It’s perfectly feasible that the gilded profiteers riding the Beckham gravy train were actively seeking to fill the void that his imminent demise looked set to create, and so set about fast-tracking Bentley’s way to fame.  Bentley, it seemed, had made it.

Of course now, he is largely remembered for two things. There was the stupendous lob for Spurs against Arsenal, a goal of the season contender, which spoke of his promise and confidence. There was also the moment when a jubilant Spurs dressing room celebrated Champions League qualification, reaching its zenith when Bentley’s cup – full to the brim with both banter and energy drink – runneth over, and was duly dumped over Harry Redknapp’s head.

These two contrasting moments sum up perhaps not just Bentley’s time at White Hart Lane, but indeed his whole career: moments of genuine promise interspersed with the bone-headed boorishness of the LAD. It now seems reasonable to suggest that he was no more than a prettier Jimmy Bullard, and perhaps nothing more.

Why has his career ended up this way? The general consensus seems to be that it’s down to a lack of focus and effort, but Bentley has other theories:

“He never said anything to my face about it – he didn’t really ever say much to me at all – but I knew I was always up against it after that.”

It’s interesting to note his Wikipedia page too, which is most likely edited by someone close to him, and mentions how he “is often talked about as a should-be midfielder, but he is often used out of position as a winger despite lacking the pace of some of his Premier League counter-parts.”

The problem with pace is clearly an issue for him, as he alluded to shortly after joining Birmingham on loan in 2011:

“They don’t deserve me to come here and think I’m this creative player who doesn’t have to run much. I’m going to have to graft.”

Regardless of these issues, Redknapp would deliver the most telling career appraisal (as well as an embarassing indictment of Bentley’s star worship) after the player had been arrested for drink-driving in August 2009:

“He needs to lose that tag of ‘he’s another David Beckham.’ I’ll be honest, the lads call him Becks and I don’t think that helps him.”

Bentley would downplay these suggestions while at Birmingham:

“There’s probably a misconception of me. People sometimes get this perception that I’m a big-time Charlie. But that is not the case.”

This stab at humility would fall short when revealing his hopes for the transfer:

“If I do the groundwork, do the running, I know my quality will come through.”

His time at Birmingham, much like last season’s loan to West Ham, would both yield little in the way of quality – 20 games, 1 goal, 1 assist.

Bentley is ‘Bents’ no more

This is borne out by the fact that he now finds himself at FC Rostov, when some lower-scale Premiership clubs could surely benefit from his presence. It is plausible to read something into the fact that Mark Hughes wasn’t tempted to give him a chance at QPR, given that Bentley fulfills many of the criteria adopted by the club for several of their summer signings: discarded by his club, past his best, a former charge of Hughes.

It’s possible that Bentley is happy to be free of the stigma which he feels he has unfairly accrued. Perhaps he should be applauded for trying to advance his footballing education as part of a different culture when so few English players do. But this transfer has far more in common with the paucity of options reflected by Joe Cole’s move to Lille, or Joey Barton’s to Marseille, than, say, David Beckham (that man again!) joining Real Madrid.

Bentley’s greatest contribution to the game could well be in his ultimate failure, a very modern, paradoxical triumph. In this lamentable age of the cosseted, self-absorbed tosser-footballer, it should be celebrated when someone who appeared to twin arrogance and laziness fails to make it to the top. There is no shortage of wasted talents in the game, and fans of every club in the world can add to the litany of crudely extinguished flames: Sonny Pike, Nii Lamptey, Paul Lake, Sebastien Deisler, Freddy Adu.

There are always reasons why players fail to live up to their potential. When those reasons are clear to see, as they were in Bentley’s case, we should be thankful that this sort of malaise only struck someone such as him, rather than a Lionel Messi, Cristiano Ronaldo or Andres Iniesta, as their failure would’ve been a genuine loss, rather than a justified squandering.

New players will always remind us of old players. If Bentley had successfully carved a niche for himself as a preening footballing tribute act, that could have set a precedent nobody would wish to see repeated.