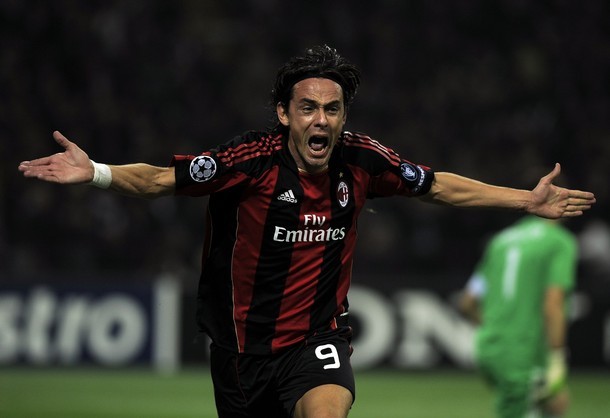 Filippo Inzaghi at 37-years of age is edging ever nearer to the day when he’ll hang up his boots and sit back in Piacenza revising all his memories in a career that has been littered with goals, goals and goals.

His brace in mid-week against Real Madrid was a reminder of his capabilities and what ‘Pippo’ is all about. He’s an unconventional forward – one who diligently and cunningly sneaks in behind the back four of Italian defences preying on a mistake or lack of concentration before he nestles in a six yarder and exuberantly celebrates with screaming passion.

“That lad must of been born offside” – the famous quote by Sir Alex Ferguson who couldn’t of made a more apparent summarisation of the Italian. Here is a player who more or less wrote his own little handbook on how to be a devious genius when it comes to centre forward play. He’s one who has never relied on pace or skill – but one who has an eye for goal – a natural finisher. His craftiness to sneak on and offside and fool his adversaries in defence is of high acclaimed intelligence

It’s a trait of his that he has used for so many years that it almost seems impossible for his opponents to work out his tactic – and how effective it is. His predatory play in the box has been nothing short of spectacular.

His brace against Los Blancos on Wednesday not only equalled Gerd Muller’s European Cup record of 69 goals but he also went onto etch his name into UEFA folklore by breaking the record by reaching the magic number of 70 – an amazing feat.

He is a unique star, absolutely no question about that. His cunning play has been matched by a few select other’s such as Ruud van Nistelrooy who relies on his movement to bamboozle the thinking of defenders by springing on and off-side to beat the trap and get behind. Inzaghi nine times out of ten may fail to beat the offside trap during a game but when he does it normally ends up with the formality of a goal along with another rapturous celebration.

It does beg the question now that he’s edging to retirement, will there be another ‘Pippo’? It’s very rare nowadays for a player to master his kind of expertise when it comes to an unconventional method of centre forward play.  The reminder of his originality against Real Madrid was evident for all to see when he was clearly a yard offside for his second. On another day it may have been chalked off, but Inzaghi being what he is took a chance and it paid off.

Cunning, devious, intelligent and sheer spectacular, Filippo Inzaghi is a true master of his game.