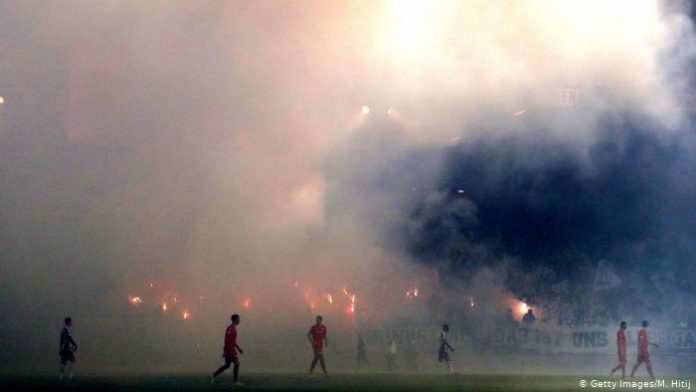 Matchday 27 of the Bundesliga beckons, so let us take a quick look at all the fixtures for this weekend:

The second matchday after the restart kicks off with a bang – The Berlin Derby. This will be more than just a derby – as the two teams are separated by a solitary point. Hertha go into this match on the back of their 3-0 victory over Hoffenheim, whereas Union lost 2-0 to Bayern, but they won’t be too displeased as they managed to frustrate the record champions for large parts of the match. Expect a cracker. Not these crackers, though:

Player to Watch: Matheus Cunha – After his stellar display against Hoffenheim, the young Brazilian has the stage set for him shine against local rivals Union. Don’t be surprised if he picks the lock of Union’s defence a couple of times.

Mönchengladbach and Leverkusen are third and fifth in the table respectively, and are separated by a mere two points. Mönchengladbach need a win to keep their slowly fading title challenge alive, whereas Leverkusen are desperate for the 3 points to cement a place in the Champions League spots. Mönchengladbach come on the back of a 3-1 victory against Frankfurt on Saturday, while Leverkusen won their Monday night match against Werder Bremen by 4 goals to 1. Expect a high-scoring match between these two attacking sides.

Player to Watch: Kai Havertz – After yet another brace against Bremen, the German starlet looks to have restarted the season just where he left off. And with reports suggesting that his inevitable transfer to Bayern has been put off till 2021, he will be even keener to prove his worth both to his side, as well as to the rest of the watching world.

The Volkswagen Arena will see sixth-placed Wolfsburg taken on runners-up Dortmund, who are flying high on the back of their 4-0 thumping of Schalke in the Revierderby. Wolfsburg, on the other hand, barely managed to defeat Augsburg, as it took them 91 minutes to get the winning goal. Dortmund have to win to stay hot on the heels of Bayern, and therefore they will throw the kitchen sink at Wolfsburg if they have to. If Wolfsburg can hold out against the star-studded Dortmund attack, we will have a very interesting match on our hands.

Player to Watch: Julian Brandt – He’s a player who’s gone slightly under the radar in Dortmund’s attack, but he has been an absolute steal for them since he joined them for a reported €25 million from Leverkusen. A man of the match display against local rivals Schalke can only add to his worth. Expect another dazzling display from the German.

Seventh-place Freiburg play host to Werder Bremen in this crucial match. Freiburg need a win to have a chance of entering the Europa League places, whereas Bremen are sitting in the relegation zone and are in dire need of positive results if they wish to see another year in the German top-flight. Their loss against Leverkusen wouldn’t have helped their confidence in the slightest way, but Freiburg’s draw against RB Leipzig will surely be looked at as a positive result, especially with Robin Koch’s 94th minute winner being ruled out for offside. Be sure to watch this one.

Player to Watch: Manuel Gulde – He had a great match against Leipzig, as he managed to contain Werner and the rest of the Leipzig firepower for most of the game, and he also got a goal. If he plays as he did, Bremen’s already diminishing chances of survival will take another massive hit.

Bottom of the table Paderborn face ninth-place Hoffenheim with a desperate need for a victory to keep their dying survival hopes alive. They scrapped to a draw against Düsseldorf, and will need a better result against the side which lost 3-0 to Hertha. This match could decide the fate of Paderborn.

Player to Watch: Kai Pröger – He was Paderborn’s only threat against Düsseldorf, as he tormented the right flank. They will need another great performance from him on Saturday.

13th-place Frankfurt travel to Munich to face the league leaders Bayern in the Allianz Arena. Bayern look to extend their winning streak to 6, as Frankfurt come on the back of a 3-1 defeat to Mönchengladbach. It should be an easy victory for the record champions but with football, you just never know.

Player to Watch: Robert Lewandowski – The Polish goal-machine just cannot stop scoring, and he says he is feeling fitter than ever after this break, so we can expect some carnage from him. 6 goals in 6 minutes? You can’t rule anything out with him on the pitch.

8th-place Schalke take on 14th-place Augsburg for Sunday’s first match. Schalke will be nursing many wounds, both to their pride as well as morale after the derby thrashing at the hands of Dortmund. This will be a perfect opportunity for them to get back to winning ways, and reignite their Europa League charge. Augsburg will want to take some points away to build a healthy cushion over the drop zone.

Player to Watch: Philipp Max – The Augsburg left-back had a very good game against Wolfsburg, and if he can replicate such a performance, Schalke will be in trouble.

15th-place Mainz host 3rd-place Leipzig needing a win to steer clear of the relegation zone. Leipzig need the 3 points to reignite their fading title challenge, especially after a disappointing draw against Freiburg. They will need to show their character and ability to get over this adamant Mainz team.

Player to Watch: Timo Werner – The Leipzig hitman is being linked to various clubs, and with a goalless match against Freiburg, he will want to show his immense quality against Mainz as the whole world watches on.

10th-place Köln take on 16th-place Düsseldorf, who need the 3 points to push out of the relegation play-off position. The Billy Goats, on the other hand, have made a great charge to go far away from the drop zone, and can now cement their place in the top half of the table with a positive result. They threw away a win against Mainz last weekend, and will look to improve on their first-half performance from that game to get the 3 points.

Player to Watch: Mark Uth – He worked his socks off for his side against Mainz in his unfamiliar number 10 role. He looks to be getting more and more comfortable in this role for his boyhood club, and the winter switch for him looks to have worked wonders for his campaign.

Let’s get set for another cracking weekend of the Bundesliga. Stay tuned for match reports at the end of every match.